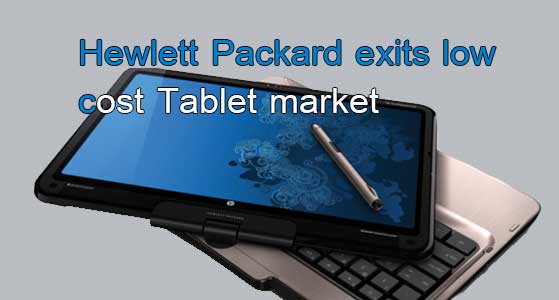 HP has been quite active in the tablet segment for the past couple of years. Its main focus area was the low cost segment aimed mainly at developing countries like India. The company did moderately well by finding takers in middle class buyers.

However, declining prices and slowing demand has led the company to announce that it is exiting the low-end tablet market. The company will instead focus on detachables, hybrids and business tablets at the higher end of the market.

"We are going to focus where there is profitability and growth and will not chase the low-end tablet market. We are focusing on business mobility to deliver tablets built for field service, education, retail and healthcare," said Ron Coughlin, president for personal systems at HP.

HP’s website has already stopped listing many low-end Android tablets. The remaining lower-end products such as the US$99 HP 7 G2 tablet and $149 HP 8 G2 tablet have been out of stock for months, and it's unlikely that they will be available again. Some online retailers do offer them at cut-rate prices. The least expensive tablet on HP's site is now the $329.99 HP Envy 8 Note tablet with Windows 10. Windows is the primary OS running on most HP tablets with a handful of them running on Android.

HP's change in tablet strategy came after the company split into two: HP Inc. and Hewlett-Packard Enterprise. Cutting ties with low-end tablets is among the first decisions of the new HP Inc. to generate more cash flow.

There's no shortage of low-cost tablets from other companies, though. It's quite easy to find a low-cost Android tablet from little-known device makers for under $100, and big names also remain in the market. Amazon's 7-inch Fire tablet is selling for $49.99. Lenovo, Acer and Asus also offer low-cost tablets. After years of unabated growth, tablet shipments are expected to decline this year. Premium tablet makers such as Apple have seen a steady decline in iPad sales. According to projections by research firm IDC, tablet shipments will total 211.3 million in 2015, a decline of 8.1 percent when compared to 2014. Going ahead, HP's focus will be more on hybrid devices that can be used as both laptops and tablets. Products like the Spectre x2 -- which has a detachable screen -- and Spectre x360, which has a screen that folds to turn into a tablet are examples of HP's current focus, Coughlin said.

The strategy followed by HP is similar to that of Apple and Microsoft, which offer premium tablets. And like HP, Dell has been scaling back its low-priced tablet offerings to focus on profitability. Dell wants to offer premium tablets and hybrids with features like 3D cameras and high-resolution screens.