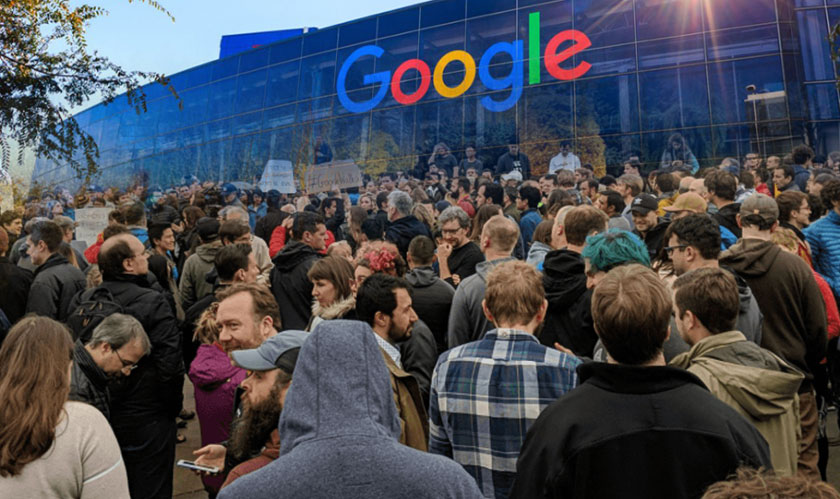 At least 20,000 Google employees and contractors participated in the mass global walkout last Thursday to protest the way the company handles sexual harassment. Meaning, employees poured from offices in 50 cities around the world were more than 20 percent of 94,372 Google employs.

“We have the eyes of many companies looking at us,” said a Google employee in New York, who participated in the protest. “We’ve always been a vanguard company, so if we don’t lead the way, nobody else will.”

It all started when an earlier investigation revealed how Andy Rubin, the Android co-founder, was compensated $90 million upon his exit from the company following a sexual assault accusation against him. The journal also detailed on how Google has shielded executives accused of sexual misconduct.

The scale of Thursday’s widespread demonstrations amazed everyone in the tech industry and “it felt like lightning striking in how fast they came together,” a Google employee told about the protest. Brishen Rogers, an associate professor at Temple University who specializes in the relationship between labor and technological development said, “I've never seen anything like this in the tech sector… The numbers and level of coordination involved in the Google strike were unprecedented.”

Another employee protestor told, “I'm here because every one of our voices matter and if we are not standing together the necessary changes won't happen.” Many employees, however, declined to give their full names demanding anonymity. Also, a retaliation hotline organized by The Tech Workers Coalition ensures that no employee is victimized for their participation in the walk-out.

Collective bargaining or Unions are nearly non-existent for white-collar tech workers, who typically enjoy large salaries, perks, and other benefits. But, over the last year, there’s been an increase in tech industry organizing, as workers stand against their employers and their take on controversial projects and government policies.

“The Google walkout amplifies the wave of tech worker organizing that we see in #TechWontBuildIt and #NoTechforICE,” says Sasha Constanza-Chock, associate professor of civic media at MIT who co-authored a recent open letter calling on Microsoft to drop its ICE contract.

“Showing up today is a really good start... But to be a true ally you have to sacrifice something. What will you sacrifice?” challenged a woman employee who took to the stage to address the attendees. Employees from other tech companies also participated in the protest, and according to Celie O'Neil-Hart, a YouTube employee, “This doesn’t end today. Let's keep this effort going. Time is up in tech. Time is up at Google,” she added.