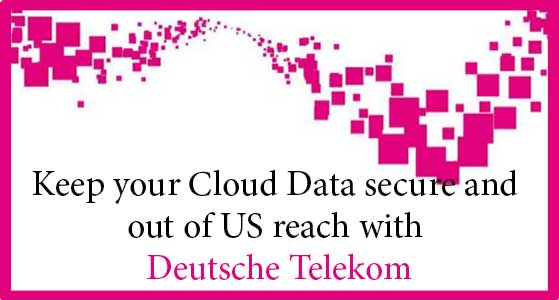 Amazon, Google and the other US leaders in cloud computing beware! Deutsche Telekom is taking on you folks armed with a unique advantage — Germany’s tough data security laws.

A subsidiary of Germany’s largest telecom group, T-Systems, has launched a new “public cloud” run out of its data centres in Germany that will offer companies computing, storage and networking services. It is built on the Cisco cloud platform and will lay the foundation for a “secure European internet of things”.

“Data on our system is 100 per cent out of the reach of the US authorities,” said Reinhard Clemens, who heads T-Systems. This move comes after Microsoft announced it would shield customer information from US authorities by housing it on facilities operated by T-Systems.

Deutsche Telekom’s offering could prove popular in Europe, where companies are increasingly calling for their data to be kept at home, on servers subject to European and not US law. The public cloud is designed for customers who do not want to build and operate their own data centres.

The company’s new service is known as DSI Intercloud that would offer similar safeguards. Although Deutsche Telekom does business in the US, T-Systems is structured in a way to keep it legally separate.

“We’ve worked on this for two years and it’s clear that the US government has no chance of forcing us in Germany to deliver data to the US,” said Mr Clemens. Data could only be accessed, he said, “as part of a German criminal prosecution, or if the customer himself wants it.”

But Deutsche Telekom has had its own problems with data security. The group admitted in 2008 that it had illegally used client telephone data to spy on its own board members and on journalists, in an attempt to stop leaks of sensitive information to the media. In addition, T-Systems is likely to face strong competition from local players.

Gartner’s Mr Casper is sceptical about T-Systems’ appeal. “Will people actually buy the “Operated in Germany” option? Some will, but not the majority,” he said. “Above all, people want cheap, fast and high-performance.”