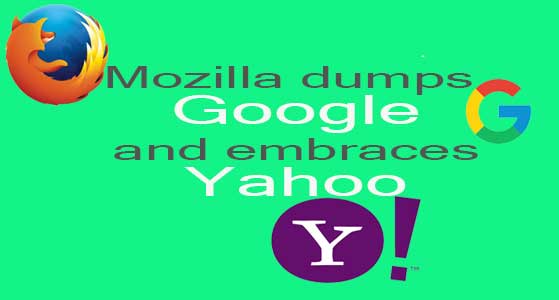 Earlier, Google was the default search engine globally for all markets. But now Mozilla will strike country-by-country deals. Mozilla said that the change from one to many search partners would result in better ideological alignments, but said nothing about revenue potential. "In evaluating our search partnerships, our primary consideration was to ensure our strategy aligned with our values of choice and independence, and positions us to innovate and advance our mission in ways that best serve our users and the Web," said Chris Beard, Mozilla's CEO.

Mozilla's chairwoman, Mitchell Baker said "A choice of device will determine much of your online experiences — the software and content available to you, what payment systems you can use, where your data goes, which if any of your data you can manage, the way you identify yourself to the world," Baker wrote in a blog post on Nov. 10. "People and businesses are able to innovate within the frameworks determined by larger businesses. One can only act as you're given permission. Frankly, this direction for the Internet sucks."

During the same time, Mozilla released a Firefox update that offered privacy-focused DuckDuckGo as a search engine choice, another clue that it would dispense with Google. "DuckDuckGo gives you search results without tracking who you are or what you search for," Johnathan Nightingale, vice president of Firefox, said last week. "Other engines may use tracking to enhance your search results, but we believe that's a choice you should get to make for yourself."

Analysts believe that this move by Mozilla will bring in more money. "Mozilla realized they could make more money by splitting up defaults by region instead of signing a single global deal," opined Ben Thompson in his Thursday Daily Update to paying subscribers of Stratechery.com.

Mozilla will roll out Firefox's Yahoo search default next month with a new user interface (UI); the UI will debut in other browsers in early 2015.