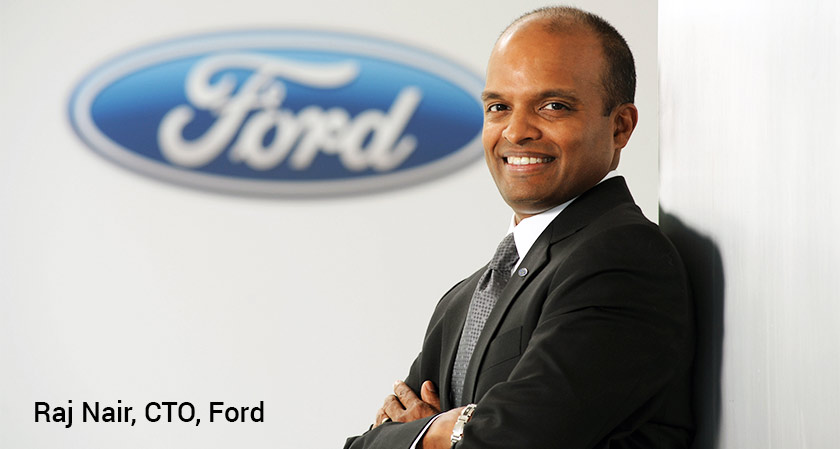 Automotive companies have been looking for a replacement for fossil fuels and have been researching for alternatives since decades. Electric cars were the first alternative considered and a lot has changed in the industry since then. While some still believe that electric cars are the future, Automakers are betting on something else, something far advanced than just batteries and electrical power, Hydrogen.

Ford Motors CTO Raj Nair seems to one among those who believe Hydrogen cars are the future of automobile industry and ford has spared no effort in making that a reality. Ford announced in 2013 that it has gotten into a partnership with Nissan and Benz to deliver a Hydrogen car to the market by 2017, but now Nair told that the car is not on its way this year and that the whole timeline for hydrogen cars has been shifted. Nair spoke at the Techcrunch Disrupt in New York yesterday and spoke on the future of Ford, self driving cars, Ford Tech and more.

Honda and Toyota have been investing heavily on hydrogen powered cars. Honda released its first commercial Hydrogen car called FCX way back in 2002, and it was a disastrous failure. Toyota made a similar attempt with the Mirai in 2014.

“ A lot has changed since 2013, I think hydrogen fuel-cell technology is a very spiky technology progression and there are times that we feel like we are really progressing fast and then it's going slow. ”
-Raj Nair, CTO, Ford

Although Hydrogen cars provide better efficiency linger range among other things which compare better to a electrical car it still does not pack a punch like Tesla. That was about to change with the Ford 999 until the project was pushed back.

Ford acknowledges the advantages Hydrogen cars provide over electric vehicles in a company blog post outlining its hydrogen plans, stating that the vehicles could be "an important long-term solution for improving energy security and diversifying our energy sources." The company has been working on the technology since 2005.

The biggest problem faced by these auto giants is the infrastructure. While they are producing Hydrogen cars that exceed 300 miles in a full tank easily, the only place they can have a worriless drive would be in the state of California. It has a total of 25 filling stations. The US in total has only 35 hydrogen filling stations, when compared to the almost 16,000 electric charging stations that exist in the US; it is a very small number.

Right now only California is making attempts on its own to increase the number of Hydrogen stations. The state announced $100 million in to the project and will shell out an additional $20 million to set up more than a 100 of such stations by 2020. If this does happen then we could see a lot of Hydrogen cars on the road in the near future, at least in California.