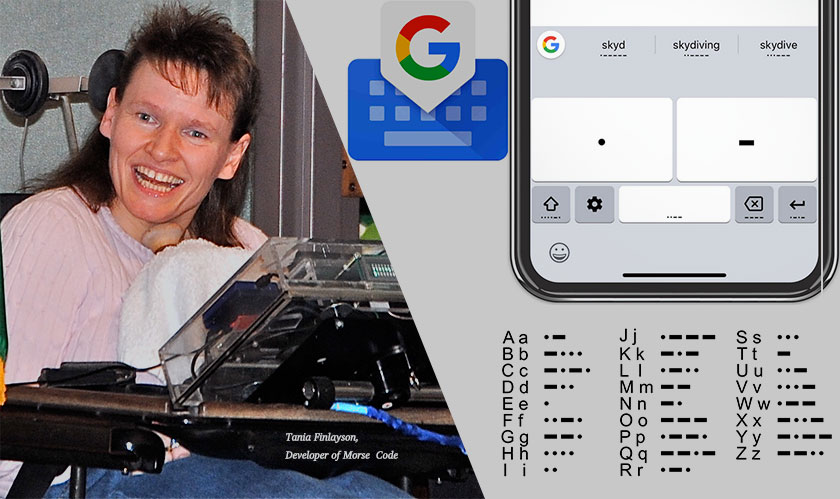 Earlier this year, Google partnered with Tania Finlayson, the developer, and expert in Morse code assistive technology, to introduce Morse code (code of dot and dash used to spell out words by the incapables) on Gboard for both iOS and Android.

Tania Finlayson was born with Cerebral Palsy and she did nothing less than a normal human-being apart from her ability to communicate very effectively. She used a head stick to point to words on a communication board and also used the stick to type using the typewriter.

A study for non-verbal children at the University of Washington, led by Al Ross, introduced her to “Morse code communicator”. “The device was revolutionary.  It would convert my Morse code into letters then speak out loud in English and had a small printer installed in it… At first, I thought learning Morse code would be a waste of time… but… it gave me total freedom with my words… ,” she said.

The Morse code keyboard on Gboard allows people to use Morse code to enter text, instead of the regular (QWERTY) keyboard. Gboard for Android lets you hook external switches to the device, so a person with limited mobility could operate the device – and the source code that facilitates this was developed by her and her husband Ken.

“My experience with the Morse code communicator led me to a partnership with Google on bringing Morse code to Gboard. Working closely with the team, I helped design the keyboard layout, added Morse sequences to the auto-suggestion strip above the keyboard, and developed settings that allow people to customize the keyboard to their unique needs,” says Finlayson. “I’m excited to see what people will build that integrates with Morse code—whether it’s a keyboard like Gboard, a game, or educational app, the possibilities are endless,” she added.

Finlayson laughingly recalls her hilarious first words, to her dad, using the Morse code. She was also disappointed by the fact that most of the technology today is for the mass market leaving behind disabled people unattended. And now, she proudly presents her invention saying, “Developing communication tools like this is important because, for many people, it simply makes life livable… if anyone wants to try Morse code, they can use the phone in their pocket.”