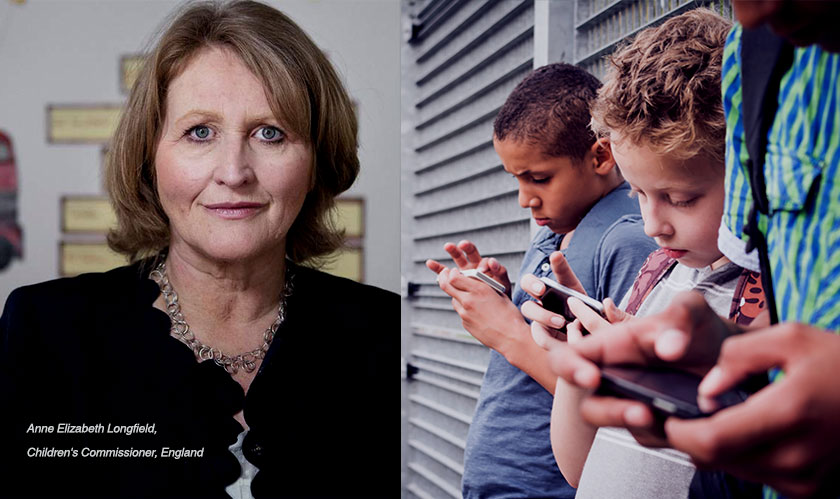 Anne Longfield, Children’s Commissioner for England, spoke about children’s unhealthy dependency on the social media and internet. Anne suggests that social media firms shut down technology that deliberately keeps the younger generation glued to the screen.

Today’s advanced computer algorithms imbibing machine learning and deep learning mechanisms records interests of the online users and bombards them with a list of videos and contents of the same kind. Ms. Longfield recommends restricting such programs for children under the age of 15.

“What we need to do is to build in the resilience, safety, and power for children by design,” quotes Ms. Longfield. She highlighted her concerns with a few examples of addictive techniques that online media platforms implement, like the auto-play videos and Snapchat streaks which encourage children to use them on consecutive days, for a longer time.

“The internet is set up to be addictive. All of the algorithms on it are silently working there to keep us addicted, whether it is the little dots that come up to tell you someone is writing a reply to the YouTube video that moves on to the next in a nanosecond,” she said.

Ms. Longfield adds, “It’s smartly set up to keep us dependent and part of what I hope to see in the next phase is to break that dependency so that children have the chance to make positive, informed choices about what they do when they are on it.”

In light of such negative comments and criticism, Snapchat shortens the streaks indicator to make them less of a focus. A Snapchat spokesperson said that Snapstreaks (conversation that is kept alive on Snapchat for days by responding to one another within 24 hours, counts the number of days and the same is termed streaks) were designed to allow friendships to deepen over time and was meant to be for fun.

According to Mark Griffiths, professor of behavioral addiction at Nottingham Trent University lists seven psychological “hooks” used to promote the use of addictive technologies. Unpredictable rewards, such as in slot machines; psychological investment, experienced by regular lottery players; reciprocation – our instinct to return the kindness of others, are a few of the standards in factors influencing the youngsters to excessively use online media.

In response to such concerns, Apple has introduced Time Limit in its newly updated OS. This new feature allows users to set time limits and alerts while using individual apps, especially the ones that are “addictive”. Google too passes control to the parents to set time limits on, say, YouTube reminding youngsters to “take a break” after a certain amount of time.