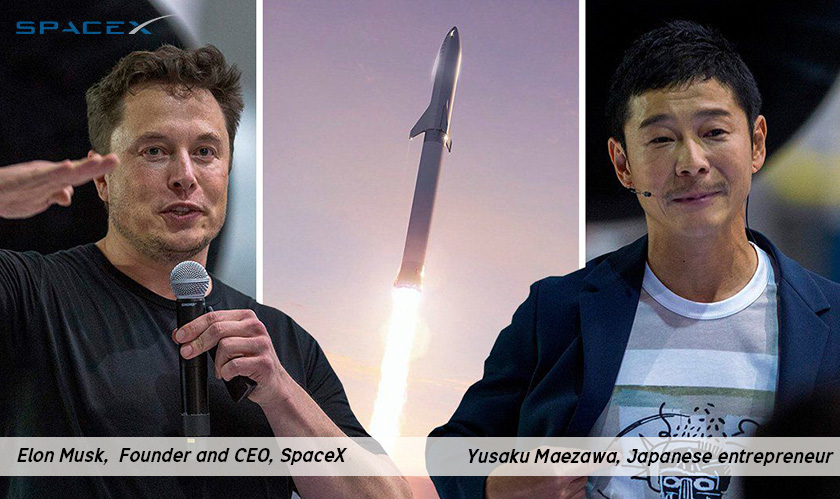 Japanese billionaire Yusaku Maezawa, founder of Zozotown- an online fashion store, will be the first private passenger to go on a trip around the Moon using the SpaceX’s BFR spacecraft. More wealthy patrons like Maezawa may be the best funding option for the underdeveloped Big Falcon Rocket (BFR) of Elon Musk’s SpaceX project.

Maezawa decides to make this trip to the moon along with “a painter, musician, film director, fashion designer, and a few other Earth’s greatest talents” and thanks “Elon Musk and SpaceX for creating the opportunity to go around the moon in their BFR.”

“Together with Earth's top artists; I will be heading to the moon... just a little earlier than everyone else… I am truly blessed by this opportunity to become Host Curator of ‘#dearMoon’,” he added.

Maezawa’s dearMoon project aims to inspire artists with the journey and to let them create art about it when they return to Earth, says he. “If Pablo Picasso had been able to see the moon up-close, what kind of paintings would he have drawn? If John Lennon could have seen the curvature of the Earth, what kind of songs would he have written? If they had gone to space, how the world would have looked today?” asks Maezawa while conveying his intentions with the project.

The trip estimated to be launched in 2023 will take four or five days to complete the mission, and the spacecraft will be a 125 miles away from the moon at its closest point. The exact price Maezawa paid for the trip was not disclosed during the conference and Musk jokingly said that “it'll be free for the artists!” However, he later confirmed that “Maezawa made a significant deposit for the project… and this will actually have a material effect on paying for the cost of the development of BFR... It makes a difference.”

“Our priorities right now is the NASA crewed mission, our satellite customers… Once we’re confident that all this is taken care of we will ramp up BFR big time,” Elon added, talking about the uncertainty in the launch date of the dearMoon project. This exciting announcement, however “will not help SpaceX achieve its short-term projects like Falcon and Dragon,” said a Space Industry analyst, Bill Ostrove.