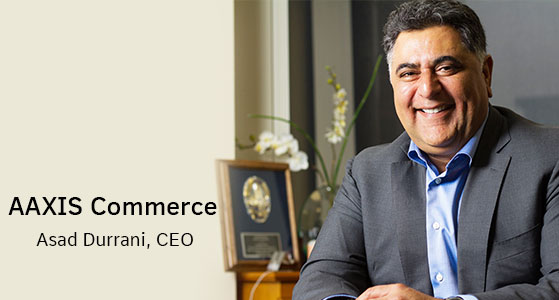 Digital commerce solutions play a pivotal role in today’s world as more and more companies try to apply the latest of the technologies to gain a competitive advantage in today’s market. Being smart is quintessentially the only thing that will set you apart because the traditional idea of hard work has been rendered archaic in these times of digital disruption. In fact, pure incessant hard work may even set your company behind if you’re not being smart. AAXIS Commerce is one company that enables you to do the smart work through its innovative approach of combining digital business processes and commerce solutions.

AAXIS Commerce came into being in 1999. It was started by the co-founders Asad Durrani and Amir Zafar as the world was at the cusp of changing as digital commerce was just getting started. In this initial period, the company was helping its customers move from complex back-office systems to newer technologies. With time AAXIS developed from a Southern California company which was focused on the media & entertainment and finance verticals, to a company that has a global footprint working across many verticals, with a specialization now in B2B organizations. AAXIS Commerce’s presence can be felt not only in the U.S but also in Latin America and in some parts of Asia.

In mid-2000 there was a rise of large Indian IT firms that were offering pricing that was never seen before in the industry. With cheaper offshore teams they were able to score a lot of clients and companies from the U.S were at a disadvantage because of this major change. But AAXIS remained positive and to remain competitive they quickly decided to go for a global delivery price point.

In 2007, AAXIS Commerce opened its first offshore delivery center in China. This was an unusual move for the time, as everyone was pretty much moving to India. But this bold decision proved fruitful as they discovered that they had access to a large pool of skilled labor in China. They managed to grow this center which had skilled labor into a Center of Excellent with over 200 skilled Commerce developers. From here they even provided service to their clients located in Latin America & U.S. as well as now being able to offer unique services to Western companies based on technology trends coming out of China.

They did not stop with China though. AAXIS continued to evolve with the market. It extended its services to a major online retailer in 2009 and expanded to Latin America. Their first major customer in Latin America was located in Santiago, Chile. AAXIS subsequently opened its Latin American Center of Excellence here in 2012.

The dot-com bust happened soon after AAXIS got started. At a time when companies were going bankrupt and the economy was going into depression the company focused on survival and was able to grow during this period by helping their clients find smarter ways to generate revenue. This is a testament to its strength as a company.

The road ahead looks exciting for the company as it gets ready to apply machine learning & AI in the online and omni channel commerce space to develop strategies in behavioral segmentation, hyper-personalization and insights-driven consumer engagement. AAXIS Commerce sees trends and has insights into new models that are rapidly evolving across America and Asia, and helps its customers lead some of these. And as social media is playing a larger role in today’s digital commerce, the company is developing its offerings in this space too. Thus, constantly diversifying and growing with time.

Mr. Asad Durrani’s career as an entrepreneur began when he joined Electrocare as a managing partner in 1987. Electrocare was a California-based durable medical equipment distributor. He was here for two years and was instrumental in driving the company to unprecedented levels of financial growth and profitability.

He founded Bio-Global Trade in 1991 which was a company focused on durable medical equipment distribution in Europe and Asia. He was here for seven years and helped the operations grow. He helped the company diversify holdings to a multi-million dollar business. He ventured into real estate development in 1998. He was successful in raising funds from independent investors and established a multi-million dollar private equity fund. He managed a few projects that brought in as much as 42% in annual returns for investors.

Mr. Durrani has been leading AAXIS since 1998 when the company was founded. The business has grown from a six-man team. The number is now in the excess of hundred. AAXIS has been in a state of continuous profitability and operational expansion n markets like China and Latin America. He earned his BA in Economics from the Macalester College in St. Paul, Minnesota.

“Our deep expertise across Commerce, marketing and data platforms,

"We enable measurable business results along the entire customer journey through better digital experiences all across touchpoints."