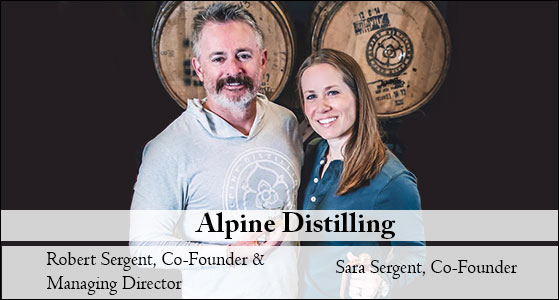 You’d think that all spirits, whether rum, whiskey, or gin, are basically made the same way, right? You are wrong. Although it’s true that each of these styles of alcohol undergoes similar processes, the details behind every bottle are a bit different.

Alpine Distilling is a craft distillery located in Park City, Utah. The distillery began in response to Rob and Sara’s, the founders of Alpine Distilling, desire to create a brand that reflected their mountain town community values, connected them to aspects of their family heritage, and would be a  positive tool to show their kids the value of building a business. Alpine Distilling became fully licensed in 2017 following investments in education in Scotland and Kentucky and sold its first product in April of that same year, its Preserve Liqueur. The distillery entered its first competition that year and received Platinum, Double Gold, and Gold awards for its efforts – a good start, according to the founders.

Alpine Distilling operates two stills under one roof. Its copper Pot Still was hand-built in Alabama, specific to design requests, and produces excellent whiskey distillate from its mashbills of 100% corn, corn/wheat/barley, corn/rye/barley, and 100% malted barley. It is a bain-marie style 500-gallon still which can produce a barrel per day. The founders have built strong relationships with two copperages, one using Oak from Appalachia for the distillery’s core whiskies and the other both Arkansas and French Oak for its Utah Straight Bourbon and Triple Oak whiskey. Truly small batch and hand-crafted spirits.

“Our Triple Oak Whiskey crowns our current whiskey portfolio,” says Rob, when queried about Alpine’s whiskey program. Select barrels of Alpine Distilling’s Utah Straight are blended and transferred to hand-made, slow-toasted, new Oak barrels of French Oak heads and American Oak staves for 12 months. This extra time, at a different barrel-proof, introduces deep fruit, vanilla, and spice flavors to the whiskey resulting in a must-have for any connoisseur. The distillery uses corn, wheat, and barley in its Utah Straight bourbon, fermenting with a Kentucky yeast strain in open-top fermentors.

Aging at altitude, with very low humidity and large temperature swings, enables Rob and Sara to create a particular environment for their barrels. The right mashbill, fermented, distilled with specific measurements, and aged for at least two years, produces unique Bourbon that presents as an excellent complement to other premium whiskies from Kentucky, the standard by which Alpine Distilling measures their quality.

Sara’s continuous still was built in Michigan, her home state, with proprietary pressure and flow rate designs to extract the best aromas and flavors from her botanical selections. Vapor extracting is a delicate process, sensitive to changes in botanical volume and the vapor basket positioning. The reason for vapor extraction over maceration or compounding is a choice by the distiller in response to still capabilities and their desire for mouthfeel and botanical highlights. The distillery’s Gin has won “Best in Show” and numerous Double-Gold awards in London, New York, Las Vegas, and other key market competitions, so her choices have been well received.

The Alpine Gin is unique as a non-floral botanical blend: juniper, coriander, angelica root, cardamom, ginger root, orange peel, and lemon peel. This produces a dynamic, flavorful gin enjoyed over rocks or in classic cocktails such as a French 75, Bramble, or Martini. “Pulling out notes from each botanical was an essential aspect of this spirit,” Sara emphatically states. The response from mixologists in Edinburgh, London, Las Vegas, and other centers of cocktail excellence reinforces that this is one of the world’s best spirits and is sure to delight any consumer at home or in their favorite drinking establishment.

Sara and Rob collaborate on the Lafayette and Spicy Lafayette products, bringing both botanical and aged whiskey experiences to produce an outstanding spiced whiskey. Fruits and spices used to flavor young whiskey would have been seen in Kentucky pre-prohibition. Alpine balances the ripe stone fruit with cinnamon and primrose to create a sweet, “jammy” whiskey that has been awarded “Most Innovative New Whiskey” in London. The Spicy Lafayette version sees the addition of one Thai Chili Pepper to the bottle, delivering an exciting back-end spice that couples beautifully with the fruit sweetness and vanilla spice from the whiskey.

Challenges faced to preserve its rich history, sustainability, and the

The decision to open a distillery in Utah presented some unique challenges and opportunities to Rob and Sara. Outside the well-known points of the church’s influence on public policy, they found the culture of Utah bar owners and resorts to be very positive and interested in supporting local brands. Most salient to their efforts was the environmental stewardship of the fragile high desert West, especially in the current times of drought and heavy growth. Their choices in water conservation, reducing waste, controlling spillage, and energy reduction methods resulted in both the Green Business Award and certification from Recycle Utah. In addition, the distillery recently began work with a group that converts its spent grains into fuel. Alpine Distilling will continue to pursue responsible production so that its efforts enhance, not damage, those affected by our production.

As the distillery carefully expands its distribution, tenets of its original plan remain vital. Transparency in its production rationale, the importance of advocacy development with end-users, and the support of outlets that allow Alpine Distilling to create true, good, and beautiful experiences differentiate Alpine from its competition. Its methods balance tradition with innovation, and each choice impacts the final product. As a premium brand, Alpine wants customers to have access to those decisions and operate under an open-door policy.

Advocacy development, sometimes measured in amplitude through social media activity, is critical as the founders’ position Alpine as a cornerstone of craft distilling. Events such as their bespoke Gin Making experience and the choice to hire a professional chef to drive their tasting menus highlight their efforts in this area. Alpine operates with focus and attention to becoming your next spirit of choice. Its reputation for character and capability drive choices to position itself as a premium craft distillery. Alpine Distilling carefully manages its growth not to miss an opportunity to connect deeply with those seeking alignment with a distillery dedicated to the stewards of the craft.

Robert Sergent is the Co-founder and Managing Director of Alpine Distilling. Sara Sergent is co-founder, manager of botanical distillation and overseas their Main Street bar and package agency.

“Our efforts mirror the values of our community:  Adventurous, Innovative, and Authentic.”