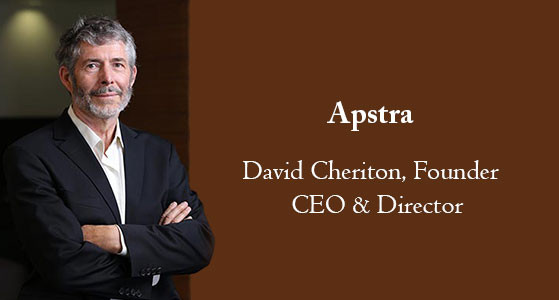 Data center networks are hard to build, deploy, operate, manage, and troubleshoot. According to Gartner, simplifying IT infrastructure is the number one strategic priority for businesses today. This is where Apstra comes in. It provides automation to data centers and saves enterprises over 80% in operational efficiencies. It delivers software that uses Intent-Based Networking to dramatically simplify data center network management.

When Bloomberg Television opened its fantastic broadcast facility at the company’s European HQ in London, the company had a huge collaboration with Apstra to pilot its technology to gain visibility across the IT infrastructure and manage the network fabric that supported the building’s media production systems.

Bloomberg’s building in London and IT infrastructure team was interested in operating a multi-vendor production network. This network infrastructure demands high-performance and availability associated with the production of eight hours of live television and four hours of live radio programming in the building each day. It connects the building’s central studio, three other broadcast positions around the building, two recording studios, a photography studio and three control rooms and all of BTV’s production equipment. This IP data network includes 90+ network nodes, 400+ 40GbE network fabric links, 4,000+ network ports, and 2,000+ live network endpoints connecting at a combination of 10GbE, 40GbE and 100GbE -- not to mention a 14 PB video storage system. So, team at Bloomberg was looking to simplify the management of this network by deploying a technology solution typically found only in data centers.

“Apstra’s system gives us a single view into the entire network – regardless of our devices, switches, operating systems or vendors. It has enabled us to gain the day-2 operations efficiency needed to manage and sustain the complex network infrastructure in our cutting-edge facility,” said Tony Lott, Bloomberg Global Head of Capital Projects. Apstra works with Bloomberg’s team to ensure the performance of the media production network through automation. The company provides digital assistance to Bloomberg’s engineers who are tasked with monitoring, predicting, and preventing disruptions in real-time.

A former Professor of Computer Science and Electrical Engineering at Stanford University, David is a world-renowned researcher in the areas of networking and distributed systems with numerous widely cited publications and patents. At Apstra, he is responsible for setting the product vision and engineering direction.

Prof. Cheriton was a Founder of Granite Systems, acquired by Cisco Systems in 1996, serving as a technical advisor at Cisco for 7 years and acting as chief ASIC architect for the Catalyst 4X00 line. He was also Founder and CTO for Kealia, acquired by Sun Microsystems in 2004.

He is a world-renowned researcher in the areas of networking and distributed systems with numerous widely cited publications and patents, receiving the lifetime achievement award from the ACM Sigcomm professional group in 2003. David received his Ph.D. in Computer Science from the University of Waterloo in 1978 and he has been at Stanford since 1981.

“After we had decided to go for a completely open system, Apstra AOS was the logical option. The implementation went smoothly and the operation is extremely simple. The entire process took just four weeks, and a single employee can now operate and control the whole network operation.” — Hanspeter Tinner, Chief Service Officer and co-founder, Beelastic

“Apstra’s system gives us a single view into the entire media production network — regardless of our devices, switches, operating systems or vendors.” — Tony Lott, Global Head of Capital Projects, Bloomberg

“We’re led by a seasoned team of networking industry leaders who bring extensive experience from companies such as Arista, Juniper Networks, VMware, BigSwitch and Extreme Networks.”

“Apstra’s automation has helped leading companies reduce time to delivery by 90%, eliminate 85% of all outages, lower OpEx by up to 83% and lower CapEx by up to 60%.”