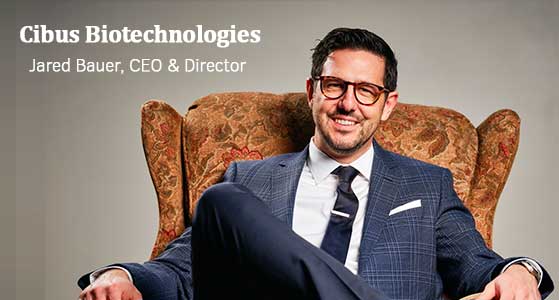 Our food security is threat­ened in two ways: First, in the past year alone, lethal viral diseases killed hundreds of millions of animals being raised as a source of protein, causing significant loss of available food and impacting the most vulnerable among us with food shortages and rising prices. Second, as food dis­tribution systems become increas­ingly industrialized and globalized, the risk of food poisoning increas­es. Antiquated lab-based testing systems for food pathogens can’t keep pace with the rapid distribu­tion of food. Food poisoning and foodborne illness sicken an esti­mated 48 million Americans every year. Current testing requires that samples must be transported to a lab and required to wait hours or days for testing to be done and the results communicated. Cibus Bio­technologies (Cibus), a Utah based biotechnology company focused on food safety and security, is de­veloping cutting edge technology to stop the spread of viral disease in the food industry, and a rapid, portable detection and tracking system to modernize food safety testing.

In 2019, Cibus acquired the exclu­sive global license for technology developed at the University of Ari­zona that claims to stop the ability of a virus to replicate. Based upon groundbreaking research conduct­ed by Dr Arun Dhar and Dr Thom­as Allnutt, the therapeutic initially will target White Spot Syndrome Virus (WSSV), a disease that is le­thal to entire shrimp ponds within a few days, and causes annual pro­duction loss to shrimp farmers of over $1 billion. There is no current effective treatment or vaccine. The therapeutic could also be used to fight other diseases in aquaculture.

Cibus CEO Jared Bauer said, “This is one of the greatest technologies I have come across in my career. This technology is critically important in stopping some of the world’s most robust infectious diseases.”

In 2019 another animal disease caused what has been called the largest animal disease outbreak in history. African Swine Fever (ASF) caused the death of an estimated 300,000,000 pigs in China, a quar­ter of all pigs existing on earth. Referred to as “swine ebola”, ASF has no effective treatment or vac­cine. Cibus is working to use novel technology to commercialize an effective treatment to prevent ASF from replicating.

One of the issues with food safe­ty testing, whether it’s for food pathogens like Listeria, Salmonella, or E-coli, or for animal diseases is that unless the testing device can truly do testing in the field, where the animal or food is located, there will always be significant costs and delays to transport the sample to a laboratory. In addition, unless the testing device is simple to use, it must always be used by highly trained scientists, and not by the average worker in the industry. Cibusis currently developing a portable, hand held, cost-effective, and rapid pathogen detection sys­tem dedicated to rapidly detecting WSSV in shrimp, and expects to be able to expand testing to other dis­eases in animals. It is anticipated that Cibus will continue to develop the platform to eventually include rapid, point of care testing for food borne diseases.

The Cibus diagnostic platform is comprised of a small diagnostic device which plugs into the USB-C port of a cell phone, tablet or com­puter, a test strip, a mobile app and a cloud based repository. The device conducts an electrochem­ical analysis of a sample, which takes a few minutes. The Cibus app transfers results to the repository where results can be tracked, ana­lysed and data can be shared with software based quality manage­ment systems in real time. Unlike traditional testing, the platform is designed to be taken to wherever the sample is located and accurate­ly run by someone with minimal training.

New technologies at the heart of Cibus’s Diagnostics System simpli­fies remote testing, removing the time and cost of sample transpor­tation..Laying the foundation for a safer and stronger food supply chain.

These novel technologies address critical needs and make Cibus Biotechnologies one of our 30 most valuable companies to watch in 2020.

Jared Bauer has focused his professional endeavors on the medtech industry and is also the CEO of ProLung Inc., a company delivering technology that improves cancer testing. In 2012, Mr. Bauer previously founded Exuro Medical and acquired BurnFree Products. In just two years with a focus on sustainable revenue gener­ation, he led the Exuro Medical team to expand BurnFree distribution to 58 countries, managing regulatory processes, re-working quality systems and making BurnFree the second largest burn treatment product line in the world. Mr. Bauer currently serves as a trustee at The Oliver Fund, which is a non-profit he co-founded with his wife Sarah to honor their late son.

“The Cibus test­ing system is a portable, simple, inexpensive de­vice capable of testing virtually anything relating to food safety. The Cibus therapeutic can cripple viral growth”