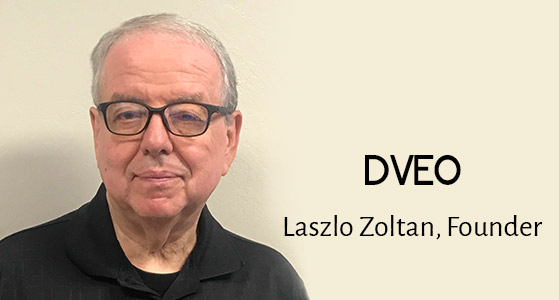 DVEO: Worldwide leader in Digital Video for Telcos and Broadcasters

The Broadcast industry has had to evolve with the flow of time. From being largely dependent on  radio it made its transition to television. And now as the digital age beckons a new change with the proliferation of cloud computing, yet another transition is happening. Leading the charge with its broadcasting solutions is DVEO, a San Diego based company.

DVEO was founded in 1982 by Laszlo Zoltan. The company began its journey as a Sales Representative Organization drawing from the strengths of the founder who had been a Sales Engineer for Intel and AMD for 5 years before DVEO. At the time, Silicon Valley companies were on the lookout for strong representation which allowed  DVEO an opportunity to establish  with little capital. The company became one of the most successful representatives in the Silicon Valley in just 7 years.

The company then pivoted to become a Value Added Reseller (VAR) in 1993. However there are always setbacks when you run a business and one such setback occurred when the company was let go by Cisco because of its unwillingness to invest in 10 new sales persons in a year’s time.

The company once again changed direction in 2007 in an effort to re-invent its offerings. This time, DVEO wanted to create its own products. It continues on this model to date. The company today has its own engineering teams which create products and devise solutions for its customers.

DVEO is responsible for cutting edge video streaming solutions which it provides at about half the price of what is available out there. The company makes this happen mainly through the distributed organization structure which comes about due to the presence of high performance individuals in the company and an ad hoc management style. Not averse to taking risks, DVEO explores newer frontiers as it continues its innovation.

“We believe that risk taking is important and taking fewer risks is a recipe for company decline. After all, risk, is one of the hallmarks of business success,” says the founder Laszlo Zoltan. A large part of this sense of security comes from the fact that DVEO has a healthy balance sheet and a broad product line. This product line also proves the company’s interest in tackling projects that larger and well-funded companies decline due to risks involved. “Right now we have taken on a project that a very large company declined for a major sports network, somewhere in the world,” added Zoltan.

The company has been very successful in the recent years. In the last few years, DVEO has won major deals against large public companies. One instance of this success was when it beat out a large company in the advertisement injection space. It was a million dollar deal. Their product worked and brought a stepwise increase in advertising revenue to its customer.

More recently, the company was recognized for a Technical Emmy by the Academy of Television Arts and Sciences. In April 2019, DVEO received an Emmy Award in front of industry luminaries for “advancing the state of art in distributing television signals over digital circuits.” The company received the award for its DOZER™ technology, which enables video operators to improve video distribution over IP networks.

But what gives DVEO the edge over its competitors? “Our products are designed with open source software whenever possible or libraries licensed from leading software developers. Rarely do we start ‘from scratch’. This allows us to move quicker than many of our competitors in the market. We also believe in rapid iteration of existing products. We update them often; particularly, when we get a new customer for it. There is technically little between us and our competitors. Our motto is: If you need it, we develop it” says the founder.

Not only is the company’s range of products diverse, the engineers are also very open to customization. The company has developed a reputation for tailoring products to meet the requirements of its clients. These results have given DVEO the edge in many niche products. Their use of computer based platforms, moreover, makes them more versatile than others  in the space.

The company has a pretty clear vision for the next 3-4 years as it looks forward. With customers moving towards cloud computing, the move will prove to be pivotal to the company’s survival as they will have to the changing trend which will see migration of broadcasters and telco’s move to the cloud Cord cutters will prevail.

“We are always pursuing growth and expansion into new markets. This past year we exhibited at Broadcast Asia in Singapore. This is a rapidly expanding market that is pursued by strategically minded companies who see rapid market growth in India, Vietnam, Thailand, and Indonesia,” says Zoltan.

Prior to founding DVEO, he was a Sales Engineer at Intel and AMD in the 1970’s. He then served as a Sales manager at Matrox in the 1980’s. He has also been an independent Sales Representative for Matrox, JVC, Panasonic, Pulnix, Hitachi, Adobe and more.

He stays up to date with the products and companies by reading many trade publications, and attending major trade shows. He founded DVEO in 1982.

"We've been in business since 1982 providing solutions to the  TV broadcast industry."