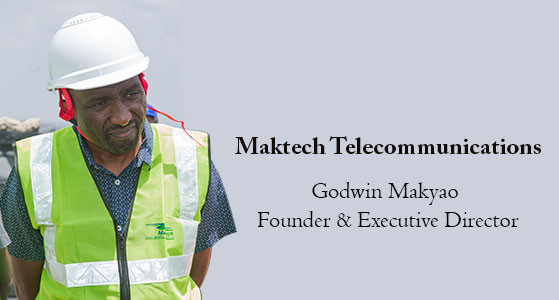 Maktech: Our Innovation Is Your Future

Rarely does a company come along where it is focused on the growth of the local community and the country. Tanzanian company Maktech is one such gem. Based out of Dar es Salaam, the company has helped Tanzania achieve a great deal of milestones when it comes to the Telecom sector.

Godwin Makayao is a renowned figure in the Tanzanian business circles. His innovations and vision have helped bridge a large gap of connectivity that existed in Tanzania. He established Maktech in 2001 to address this issue and to improve the lives of the Tanzanian citizens. His business acumen has helped many in the country. In a brief interview, we asked him about Maktech’s plans for the future and expansion to other countries in Africa. Here are the excerpts from the interview:

How are you making a difference in Tanzania? How did you get the idea of installation and maintenance of telecom Infrastructures and equipment?

Maktech is making a difference in Tanzania by working with all the key operators and key suppliers to bring the latest technologies in the Telecom sector. We deliver acceleration for the growth of the Telecom sector by enabling penetration to the rural areas where we can deploy technologies like 3G and 4G. This has led to the growth of e- learning in higher learning institutions as well as e-commerce that impacts different sectors within the community of Tanzania.

The idea came to me after realizing the gap between local companies and foreign companies in the Telecom industry. I felt that there was a need for local expertise to support the growth of Telecom industry in Tanzania. By seeing this opportunity, we mobilized some of the Young Tanzanian Engineers who underwent the professional training to cover the gap.

What issues does Maktech address when it comes to network planning?

Tell us about the deployment of IBS solutions. How effective is it?

Our IBS Solution is the in-building solution that makes the network signal inside the buildings especially big buildings with many partitions to become stronger. In Tanzania, especially in big cities like Dar es Salaam, Mwanza, Arusha, the IBS Solution is very crucial because most of the buildings are made of thick walls with many partitions where the signal strength tends to be poor. By deploying the active and passive IBS System, we have managed to solve that problem and bring stable and quality internet data to people living in residential apartments or office spaces, hotels etc. Maktech has been working closely with Vodacom and Helios Tower to deploy the most superior IBS System and this was done to a number of big hotels and malls in Dar es Salaam.

The IBS solution has proved to be very effective because after the deployment of the solution, the signal outcome became very strong and users enjoyed the speed of the internet data. We are anticipating the coming of 5G whereas the IBS solution will be very useful, as the technology requires the strong internet and reliable data infrastructure.

How does Maktech detect, diagnose and remediate the network performance issues?

Through the NOC that is running 24/7, we capture all the faults that are happening in the network. We detect the most critical to the minutest of concerns by using software that is equipped in the network and has been detecting, diagnosing and remediating the network performance concerns. It detects each kind of fault from power breakdown to poor signal. Through the NOC, a message is sent to the field team to fix the situation if it is critical, major or minor – depending on the fault.

Our NOC system has a high performance. It has over 99.5% of Network availability performance for our customers for 4 years now. Reports and clients overviews have been positive, since the time slot used to handle the fault and providing a solution has never exceeded the time limit.

Where do you envision the company to be in couple of years from now?

The future of Maktech is seen through its growth across Africa. Currently, we are operating in 4 countries in Africa. Maktech has another branch in Mozambique, which has been operating for 11 years, DRC for 3 years and Zambia. We are now finalizing our base in Ethiopia.

Maktech is looking towards covering Madagascar and Botswana before the end of 2024. If all goes well, Maktech wants to set its footprints in some of the Central African countries. Especially in countries deploying the highest and latest technologies and to countries where they embrace high use of Software and tech. Maktech is now focusing its 3 years towards deployment and development of software especially in areas of E-Commerce, E-Education and E-Government and social networking.

Well known for his business acumen, Godwin founded Maktech in 2001 to provide quality installation and maintenance solutions to leading Telecom companies in Tanzania. He is passionate about the Agriculture sector and founded another company, The Great Farm, to contribute to the scene. Through this venture, Godwin is redefining agriculture through the use of machineries and opening doors for foreign investors in Tanzania. In 2019, his Luxury Lodge overlooking the Lake Manyara won an award for the World’s best Luxury Hotel of the year. He has previously worked as a Project Coordinator for Vodacom Tanzania and as HOD Transmission for Tritel Communication.

“Our NOC system has a high performance. It has over 99.5% of Network availability performance for our customers for 4 years now.”