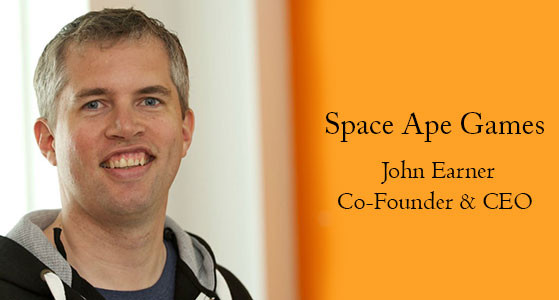 Games are an integral part of human culture—but from ancient board games to virtual reality, how we play has changed with the times. In mere decades, the online gaming world has exploded in popularity to become one of the most profitable industries on the planet. The industry's unprecedented growth now challenges traditional forms of entertainment. This unstoppable force continues to lead the future of entertainment, with many factors fueling its success. As the number of players continues to grow, it is clear that the technological possibilities of online gaming are endless.

Space Ape is a game development company that makes some of the world's best mobile games for Apple and Android smartphones. Founded in 2012 and based in London, the company is now over 110 people strong organized across seven small teams. The company's staff represent 28 different nationalities, and its games are live in 150 countries. Space Ape's mission is to make the highest quality and most successful mobile games in the world. They are imaginative, inventive, and genre-defining in our pursuit of those games.

The company was acquired by Supercell in 2017. With this, they now also have got Supercell's support to help us make and distribute massive hit games if needed. To date, they have launched four games: Samurai Siege, Rival Kingdoms, Transformers: Earth Wars, and Fastlane: Road to Revenge. Over 55 million people have played them, with more joining each day!

They have also won three Develop Awards (Best Independent Studio, Best New Game), four TIGAs (Best Independent Studio, Game of the Year x2, Best Strategy Game), and gamesindustry.biz "Best Place to Work 2017." Transformers: Earth Wars is top 50 Grossing Game on the App Store charts, and Rival Kingdoms received the coveted "Editor's Choice" award from Apple. The company's most valuable asset is its teams. It believes the best teams make the best games. Successful Space Apes are passionate about their craft, are highly productive in their workday, self-accountable, and most of all, are small-team players. Some of the popular games made by Space Ape are:

Fastlane is a mass casual retro arcade shooter with bags of personality designed to bring irreverence and style that resonates with today's mobile gamers. The game's style derives from its urban theme, larger-than-life characters and humor, and an eclectic library of music. As almost everyone is passionate about music, especially listening to music while playing games, and as such, music has inspired several world-building and character designs for Fastlane.

The Rival Kingdom is a game that lets you build the ultimate base, forge a mighty Kingdom and crush your enemies in "Rival Kingdoms: The Lost City." A game of epic strategy warfare where legendary warriors are able to harness the forces of nature. Use their devastating powers to turn the tide of battle to your advantage!

Space Ape's culture is centered around passion, commitment, autonomy, and fun. It believes small teams can change the world and takes the business of making games seriously. As a studio, they focus on output and value the importance of time spent together for collaboration. Space Ape values people as the most important resource. It believes no game can ever be more valuable than the potential of its teams to make even greater games in the future. They don't care much for job titles and org charts and are open to the best idea coming from anywhere.

John Earner is the Co-Founder and CEO of Space Ape Games. He likes Space and video games and is incredibly proud to work alongside the wonderful team at Space Ape. He managed a studio of 90 folks working on four Facebook games and was also the first Product Manager at Playfish.

John has developed the Home FTP business model, established a virtual good pricing model and set prices, and brought aboard three early game publishing partners (EA, Activision, Ubi). He has completed his BS in Industrial engineering from Standford University. He has also completed an MBA from the University of California, Berkeley.

"Our mission is to make the highest quality and most successful mobile games in the world. We are imaginative, inventive, and genre-defining in our pursuit of those games."

"Our teams are working on multiple new titles and exploring exciting new genres. We're off to a good start!"