We are pioneering a unique set of therapeutic and drug profiling capabilities: Organovo 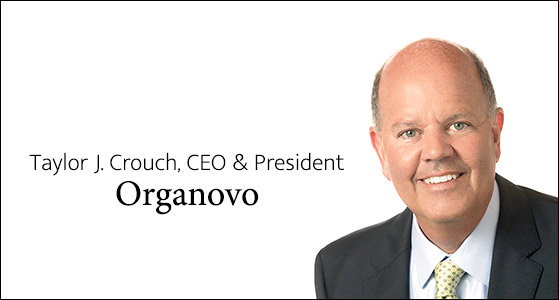 We are pioneering a unique set of therapeutic and drug profiling capabilities: Organovo

Organovo, a biotech platform firm ever since its establishment has been a leader with its extensive ability to 3D bioprint tissues with human functionality. The firm is considering multiple IND-track programs to create its NovoTissues® to understand and meet the requirements of unmet medical needs among adult and pediatric populations, starting on liver disease.

Organovo’s first IND-track program for Alpha-1-antitrypsin deficiency lately was given orphan drug designation from the FDA, and the company expects to file its first IND in 2020. In order to help fund its plan to initiate multiple IND-track programs, the company is providing access to its ExVive™ in vitro tissue disease modeling platform to facilitate high value drug discovery and development collaborations. Organovo’s wholly-owned subsidiary, Samsara Sciences, provides the company and its clients with high quality human liver and kidney cells for research applications.

What is 3D bioprinting?

3D bioprinting is the automated fabrication of multicellular tissue via spatially defined deposition of cells. The ability to spatially control deposition in the x, y and z axes allows for creation of tissue-specific patterns or compartments, with in vivo-like architecture that mimics key aspects of native biology.

3D bioprinted tissues exhibit tissue-like density with highly organized cellular features, such as intercellular tight junctions and microvascular networks. The ability to create architectural compartments, with different cell types placed in discrete locations relative to each other, results in a microenvironment with cell-cell interactions similar to that of native tissues. This in turn results in proper expression and localization of key cellular functions – such as key metabolic enzymes and key transporters – over several weeks in culture. The responses of 3D bioprinted tissues to acute or chronic exposure of drugs and known toxins resemble what is observed in vivo and in the clinic.

“The automated bioprinting process results in scalable tissues, with tight control of the composition and geometry. Organovo has the capacity to produce thousands of tissues per month in our 6,000 sq ft clean manufacturing suite, to support drug testing and therapeutic applications,” says the company.

Organovo’s bioprinting process starts with the identification of key architectural and compositional elements of a target tissue, and the creation of a design that can be utilized by a bioprinter to generate that tissue in the laboratory environment. The next step is to develop the bioprocess protocols required to generate the multi-cellular building blocks – also called bio-ink – from the cells that will be used to build the target tissue. While the bioprinting process is cell-agnostic, most of their bioprinted tissues utilize primary human cells in order to produce the in vivo-like physiology most relevant for drug testing and therapeutic applications. The company sources many of its input cells through its subsidiary, Samsara Sciences.

The bio-ink building blocks are then dispensed from a bioprinter, using a layer-by-layer approach that is scaled for the target output. Proprietary biogels may be incorporated for temporary support or as filler to create channels or void spaces within tissues to mimic features of native tissue. The bioprinting process can be tailored to produce tissues in a variety of formats, including micro-scale tissues contained in standard multi-well tissue culture plates.

Remember when movies like The Island seemed like a scary yet foreseeable future? In 2005, the sci-fi thriller introduced a compound inhabited by clones used for organ harvesting, as well as surrogates for wealthy people in the outside world. Actually, 3D technology is proving that the future looks quite different, with tissue engineering taking center stage, anticipating a possible future where organ transplants will not be needed to survive. One of the most well-known tissue engineering companies is San Diego-based Organovo. It has been actively developing a line of human tissues for use in medical research and drug discovery for years.

The company, one of the first big players in bioprinting, was founded in 2007 by Keith Murphy and Gabor Forgacs with a focus on developing in vivo liver tissues to treat a range of rare, life-threatening diseases, for which there are few current treatment options other than organ transplantation. Organovo’s ultimate goal in developing their liver therapeutic tissue is to delay or reduce the need for a transplant. The firm is also trying to harness their foundational ability to characterize specialized human cells and to 3D bioprint functional tissues to create novel in vitro toxicology and liver disease modeling platforms.

According to Organovo, initially the new liver tissue will be ideal for treating chronic liver failure, a disease that attacks millions of people around the world. It could also be used for pediatric metabolic liver diseases. The implementation of the developed tissue could solve both conditions. The number of Americans affected by chronic liver failure is higher than previously estimated and affects 1.8% of the U.S. adult population – that’s over 4.5 million Americans. Furthermore, the global prevalence of liver disease accounts for approximately 2 million deaths per year, making liver transplantation the second most common solid organ transplantation, yet less than 10% of global transplantation needs are met at current rates. It is no wonder Organovo is targeting the illness, and might also help reduce the high cost of living with chronic liver disease.

Mr. Crouch has been the company’s CEO and President since 2017 and has over 25 years of experience building and leading technology, expertise and product-based companies in the life sciences and biotech industries. Prior to Organovo, he managed and served as an operational investor in a group of leading clinical research site companies. Specifically, Mr. Crouch served as Chief Executive Officer at eStudySite, a position he held from January 2009 to June 2016; as Executive Chairman of Meridien Research from December 2013 to September 2016; and as a Director of the National Research Institute from September 2011 through July 2016. He was instrumental in building these three sister companies, and helping them to achieve significant and profitable growth and to become recognized leaders in their respective fields of infectious disease, CNS disorders and metabolic disease. Earlier in his career, he was Chief Executive Officer of Variagenics (NASDAQ: formerly VGNX – a leading pharmacogenomics company), Senior Vice President of Marketing and Sales at Parexel (NASDAQ: formerly PRXL) – a global CRO, and he also held international management positions in new product development and commercialization at Pfizer and Schering Plough.  Mr. Crouch serves on the Board of Directors of BIOCOM, an organization comprising 1,100 life sciences companies throughout California.  Mr. Crouch holds a BSE in chemical engineering, cum laude, from Princeton University and an MBA in international marketing and finance from the University of Chicago.

“We are striving to change the face of medicine through clinical development of regenerative medicine therapies for treating disease and by enabling translational drug discovery.”