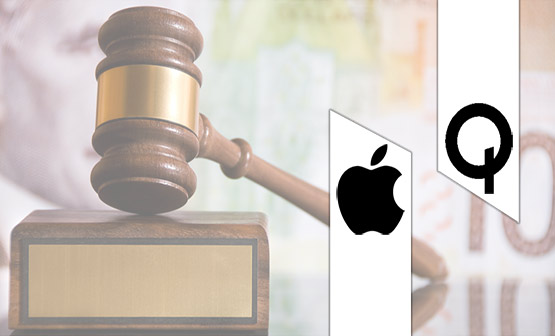 The iPhone maker, Apple Inc. had filed a lawsuit against Qualcomm in January this year for roughly $1 billion accusing the chipmaker of engaging in policies that shot up the licensing fees on patents forcing phonemakers to use competitors’ processors at a much higher price. In the suit, Apple claimed that Qualcomm also charged for patents which the device makers didn’t need including TouchID, display panels and camera components.

Now, Qualcomm is countersuing Apple seeking unspecified damages and to forbid Apple from making any further interference with Qualcomm’s agreement with the companies that manufacture iPhones and iPads for Apple. In its 134-page filing at the court on Monday, Qualcomm accused Apple of encouraging the regulators to attack it and breaching the contract.

“Apple could not have built the incredible iPhone franchise that has made it the most profitable company in the world, capturing over 90 percent of smartphone profits, without relying upon Qualcomm’s fundamental cellular technologies,” said Don Rosenberg, executive vice president and general counsel of Qualcomm. “Now, after a decade of historic growth, Apple refuses to acknowledge the well established and continuing value of those technologies.”

Previously, Apple had hinted that the Intel chips were superior. Qualcomm defended itself by saying that Apple limited the performance of Qualcomm powered iPhones so that the users would believe Intel chips performed better. The company made its major profits from licensing patents which were developed over the past three decades by research. It has more than 13,000 issued patents and patent applications worldwide. But after the lawsuit against Qualcomm, the company’s shares are down by 12 percent.