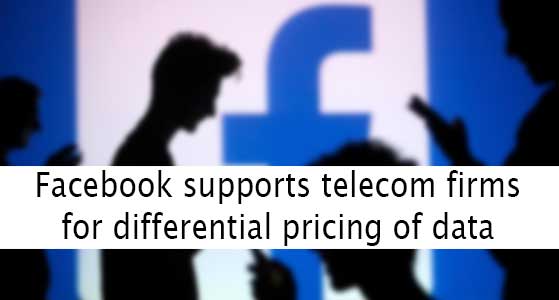 "The short answer is yes. Differential pricing, as the term is used in the consultation paper, should generally continue to be allowed," Facebook said in its comments submitted to telecom regulator Trai.

The Telecom Regulatory Authority of India (Trai) is holding consultation before framing up of recommendations for net neutrality rules. The telecom operators too have favored differential pricing for data services. Facebook's Free Basics, a zero rating platform, allows access to content or application hosted on it for free in partnership with telecom operator.
The Indian IT Industry through Nasscom, Internet firms though IAMAI and many Internet forums have opposed differential pricing of data or zero rating platforms. IAMAI members include Google, Facebook, LinkedIn etc. As per people opposing differential pricing regime, zero rating platforms locks the freedom of user in accessing content over Internet and limits their access to application or content that are offered for free on discretion of the company owning it.

At the end of first round of comments, Trai has received about 24 lakh comments of which close to 80 per cent are through campaign launched by Facebook to defend its free Internet platform Free Basics. The regulator could upload comments it received from people in phases.

Facebook said that zero rating plans can lead to increase in Internet adoption at no cost to the government, the content provider or the consumers. The firm said that it supports core principle of net neutrality."Facebook supports strong net neutrality rules, including prohibitions on blocking, throttling and paid prioritization,” it said.

Facebook has said zero rating is permitted in the vast majority of jurisdictions around the world and these plans should be evaluated case, based on a number of criteria. "Those jurisdictions that have engaged in extensive deliberation over zero rating, including the EU and the US, have concluded that adoption of net neutrality rules not require banning zero rating,” it added. The social media major said that providing free Internet services without content restrictions is likely to have limited benefits because telecom operators will need to impose limit in terms of data consumed or download speed or time till when it will be free.