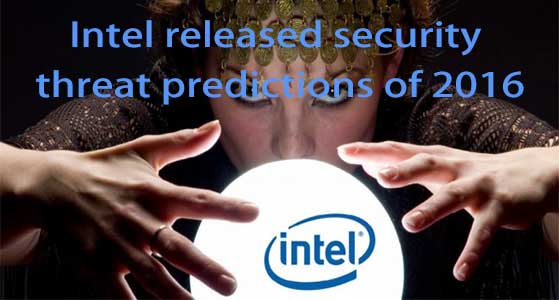 Intel released its McAfee Labs Threats Predictions Report, which predicts key developments on the cyber threat landscape in 2016 and provides unique insights into the expected nature of that landscape through 2020, as well as the IT security industry’s likely response.
Reflecting the informed opinions of 33 of Intel Security’s thought leaders, the report examines current trends in cybercrime and makes predictions about what the future may hold for organisations working to keep pace with business and technology opportunities, and the cybercriminals that target them.

“To address the business, technology, and threat landscape realities facing them, we must help organisations get to where they need to be, using technologies that will enable and not hinder their businesses, and understand what kinds of threats could be confronting them tomorrow and far into the future”. Said Vincent Weafer, Vice president of Intel security’s McAfee Labs.

For this will expand over the next year. The reason for this is that operating systems and software is hardening to a lot of forms of attack.

They also predicted a rise in the use of ransomware as cybercrime becomes more widely pursued. Essentially, more people are seeing it as a viable tool for making money, so more people will use it perhaps not all of them will be sophisticated hackers, however since ransomware can be purchased on the darkweb, it is possible that less cyber-savvy hackers will still be able to distribute and utilise ransomware.

McAfee Labs also predicts that the dark market for malware code and hacking services could enable cyber espionage malware used in public sector and corporate attacks to be used for financial intelligence-gathering and the manipulation of markets in favour of attackers.