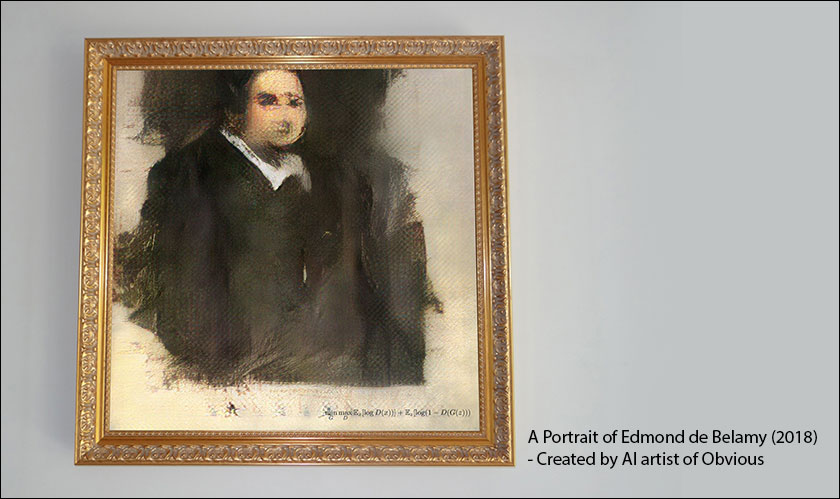 Christie’s, the world’s leading art business, would sell an AI artwork this October. The auction will feature a Portrait of Edmond de Belamy (2018), a mysterious, AI-created rendering of an aristocratic gentleman. It will hit the auction house in New York with an estimate of $7000 - $10,000. But is the art world ready to embrace AI? Not really, says a few.

Images generated using AI technology isn’t new. Google’s pattern finding software DeepDream serves radically tweaked image of an original with the help of AI. But these silly and sometimes nightmarish artwork produced by AI failed to hold the attention of the art world for long.

The portrait at Christie’s was developed by a French art collective called Obvious. The AI artist of Obvious was powered by Generative Adversarial Network (GAN). GAN joined the AI conversation in 2014 and has performed remarkably well since then – compared to the repetitious, artistic images produced by Google’s DeepDream. GANs, on the other hand, could be trained to produce completely new and dramatically different images.

Obvious fed the algorithms a training data set that included at least 15,000 portraits created between the 14th and 20th centuries. The legitimately classical-looking new images “generated” by these algorithms were presented to another algorithm (the “adversarial” part) that was trained to distinguish between real and ‘artificial’ images – until the generated portraits could fool the system into thinking they were “real,” too.

But other artists working with AI, especially GAN –since its inception, has a different story to tell. Mario Klingemann, a pioneer in AI art, thinks that the hype about what the AI technology can do on its own is premature. GANs are just one tool in the neural art toolbox, says Klingemann. “Because they create instant gratification even if you have no deeper knowledge of how they work and how to control them, they currently attract… attention seekers who ride on that novelty wave,” he added.

“Almost everyone who is working seriously in this field is shaking their head in disbelief about the lack of judgment when it comes to featuring Obvious, and of course Christie’s decision to auction them out of all artists who work with neural networks,” Klingemann says. Robbie Barrat, a young artist who works with AI, agrees with Klingemann saying, “The work isn’t interesting, or original.”  According to Barrat, Obvious makes use of an already existing implementation to simply generate low-resolution outputs that are then streamed through an online enhancer to get the final image.

Richard Lloyd, head of prints and multiples at Christie’s, however, justified the choice by telling that “Obvious tried to limit the human intervention as much as possible, so that the resulting work reflects the ‘purist’ form of creativity expressed by the machine.”