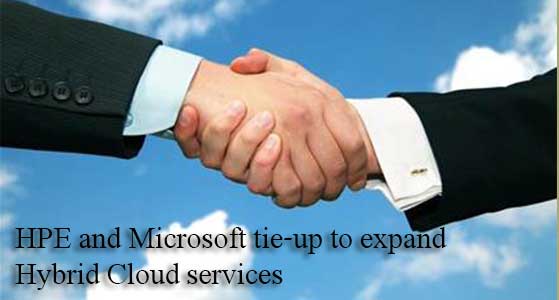 Hewlett Packard Enterprise is wasting no time exploiting its new partnership with Microsoft . The technology company, which was formerly the enterprise half of Hewlett Packard’s business before the company split in two, said yesterday it would be partnering with Microsoft to introduce a new appliance to the market pre-loaded with Windows Server 2012 R2, HPE OneView for Microsoft System Center, and Windows Azure Pack.

The launch of HPE’s latest appliance follows last month’s announcement that it would be partnering with Microsoft to develop a hybrid cloud computing platform. The deal essentially replaces HPE’s proprietary public cloud service, which it shut down in October, with Microsoft’s Azure platform. It also positions the Microsoft-HP partnership as the leading competitor to Amazon Web Services for dominance of the cloud services market.

“Public cloud services, like that Azure provides, are an important aspect of a hybrid cloud strategy and Microsoft Azure blends perfectly with HPE solutions to deliver what our customers need most,” said Meg Whitman, president and CEO, Hewlett Packard Enterprise. As a result of the partnership, Microsoft Azure will act as a preferred public cloud partner for HPE enterprise customers while HPE will serve as a preferred partner in providing infrastructure and services for Microsoft’s hybrid cloud offerings. Because Azure is now a preferred provider of public cloud for its enterprise customers, HPE said it also plans to certify an additional 5,000 Azure cloud architects through its Global Services Practice to expand its enterprise services offerings.

As part of the agreement, Microsoft will join the HPE Composable Infrastructure Partner Program to accelerate development of new infrastructure and the integration between Microsoft System Center and HPE OneView .Similarly, HPE has joined two Microsoft programs designed to expand its end-to-end cloud, mobility, identity and productivity solutions. As a participant in Microsoft’s Cloud Solution Provider program, HPE will sell Microsoft cloud solutions across Azure, the Microsoft Enterprise Mobility Suite and Office 365.

“We are now extending our longstanding partnership by blending the power of Azure with HPE’s leading infrastructure, support and services to and make the cloud more accessible to enterprises around the globe,” said Satya Nadella, CEO of Microsoft.