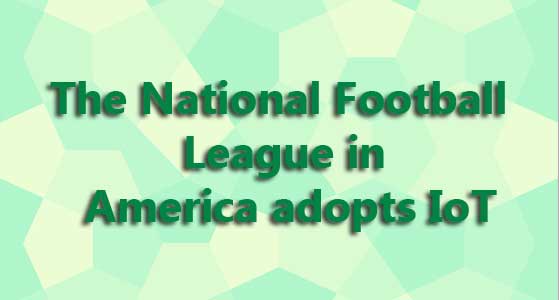 The Internet of Things (IoT)is coming to football. Yes, you read that right. The sport has opened its doors to IoT thanks to the NFL.

The National Football League (NFL) in the US is adopting the Internet of Things in a big way. Each player will be equipped with a set of RFID sensors about the size of a quarter embedded in his shoulder pads, each emitting unique radio frequencies. Every stadium used by the NFL has been equipped with 20 receivers to pick up those radio frequencies and pinpoint every player's field position, speed, distance traveled and acceleration in real time. By using two sensors for each player — one embedded in the left shoulder pad and one on the right, the system will also be able to identify the facing of each player.

The data generated to power the NFL 2015 app will be used for Xbox One and Windows 10, allowing for things like "Next Gen Replay" that will allow fans to call up stats for each player tied into highlight clips posted on the app. The data will be fed to broadcasters, leveraged for in-stadium displays and provided to coaching staff and players.

"We've always had these traditional NFL stats," says Matt Swensson, senior director of Emerging Products and Technology at the NFL. "The league has been very interested in trying to broaden that and bring new statistics to the fans. Along the way, there's been more realization about how the data can be leveraged to make workflow more efficient around the game."

NFL's technology partner for IoT is Zebra Technologies. Founded in 1969, Zebra built its name on manufacturing and selling marking, tracking and printing technologies ranging from thermal barcode label and receipt printers, RFID smart label printer/encoders and card and kiosk printers. Beginning in 2013, it began pivoting into IoT and machine to machine (M2M) applications with the launch of its Zatar software platform. In the same year, it launched its MotionWorks Sports Solution, which powers the NFL initiative.