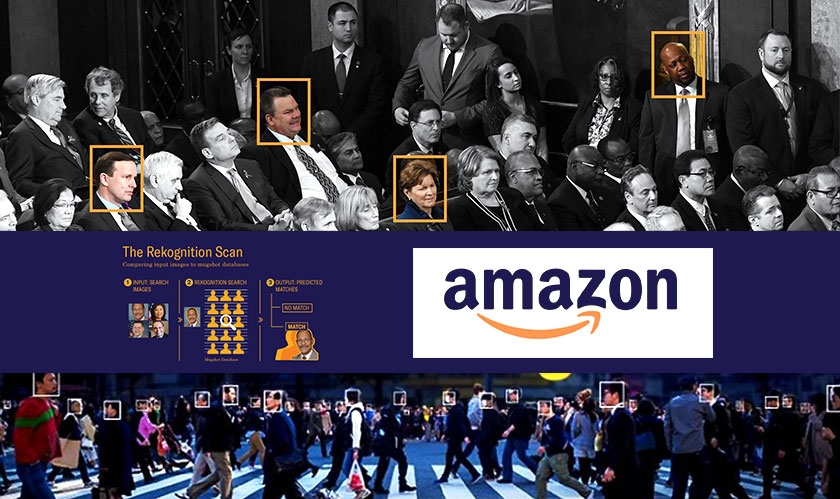 Amazon’s facial recognition technology, Rekognition incorrectly matched 28 members of the ACLU (American Civil Liberties Union) to criminals arrested for a crime. The test scanned faces of all the 535 members of the Congress against a huge mugshot database.

ACLU used the exact same technology that Amazon offers to the public or the police. The test greatly mismatched the people of color which made up to 40% of the Rekognition’s false matches.

Three of the mistified legislators — Senator Edward J. Markey of Massachusetts, Representative Luis V. Gutiérrez of Illinois and Representative Mark DeSaulnier of California, all Democrats wrote  a letter to Jeff Bezos, the chief executive of Amazon, saying there are “serious questions regarding whether Amazon should be selling its technology to law enforcement at this time.”

With Amazon aggressively marketing its face surveillance technology to police by advertising its capabilities, the ACLU disapproves saying, “Matching people against arrest photos is not a hypothetical exercise.” A sheriff’s department in Oregon has already started using Amazon’s Rekognition, without a debate, to scan people’s faces against a mugshot database.

The post also highlighted the prevailing protests from Amazon’s employees, shareholders, civil rights groups and many others over the dangers that its AI-powered facial surveillance technology could pose to the common public. The groups demand that Amazon stop providing face surveillance to the government, and the ACLU backs it by stating, “This technology shouldn’t be used until the harms are fully considered and all necessary steps are taken to prevent them from harming vulnerable communities.”