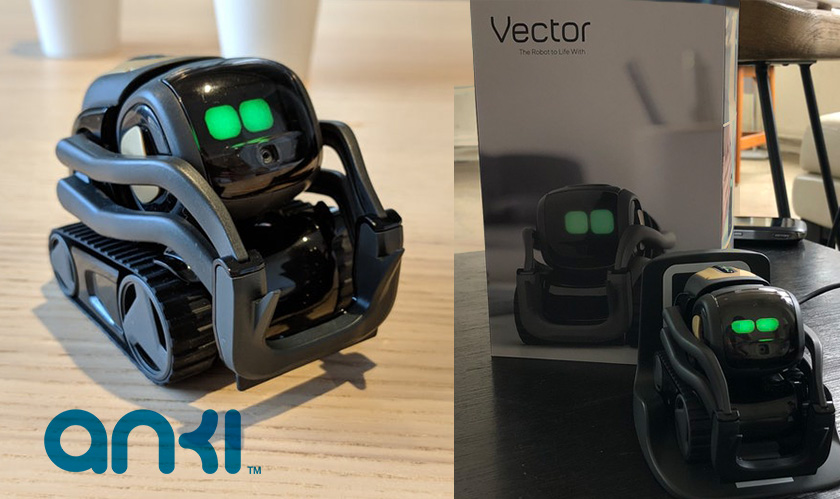 Anki, a company which builds affordable robotic toys, recently announced ‘Vector’ on Kickstarter. The tiny bulldozer-shaped robot is unique when it comes to its ability to recognize people and even say their names. Vector, unlike other smart mobile devices, can navigate on its own using its internal camera, gyroscope, cliff-detection sensors, and accelerometer.

The tiny robot which autonomously wanders around your house, or on any surface you leave it on, uses a ToF (time of flight) laser distance sensor in the front, to detect obstacles on its way. The robot can even localize itself using a popular process called SLAM (Simultaneous Localization and Mapping), and an illustration is its ability to navigate itself to its charging station without any guidance.

For the robot to wander, play, talk, and to take pictures, it needs to be connected to a Wi-Fi. The new robot, unlike its predecessor Cozmo, eliminates the need for a smartphone to control its behavior – Cozmo went to sleep when its compatible app in the phone was inactive. Instead, it is built with a Qualcomm-APQ8009 system on chip (SoC) processor that acts as Vector’s brain, eyes, and ears.

The Qualcomm chip even processes a 120-degree ultra-wide HD camera field of view – the world as sensed by Vector. Additionally, for security, Anki relies on the Qualcomm’s Content Protection and Processor Security mechanisms.

The collaboration of Vector with other home automation or smart assistants like Alexa and Google Home should be the next step for Anki. Preorders for Vector, however, begin on Kickstarter for the U.S. region.