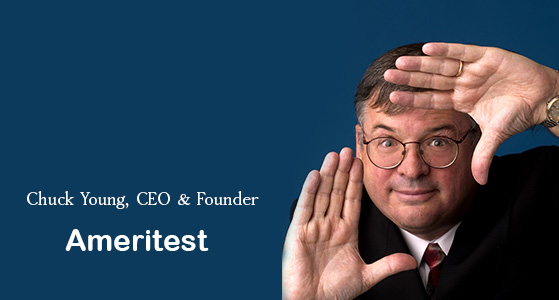 Advertisements have been making names for businesses since ages. Its power is such that it propels simple businesses into becoming big brands that stand out in the market. But making an effective advert is by no measure an easy task. Some may say it’s an art in itself. Good ads live on long in consumer memories even after ad campaigns are done. This builds trust and faith that paves way for the development of businesses. And to create such successful campaigns there needs to be a great bunch of people analyzing and proposing ideas. This needs to happen pre- and post-campaign to measure their effectiveness. Ameritest has been at the helm of advertising research since nearly three decades and has successfully helped businesses build their products into world-renowned brands.

The company started as CY Research back in 1990. Chuck Young, its founder, had lived and loved Chicago all his life. He decided to move to Albuquerque and form a team with a fresh perspective. Ameritest now has two offices, one in Chicago and one in Albuquerque. Advertisement research firms, in general, do not deal with non-verbal and visual inputs. They mainly deal with numbers and ideas. During this process, there is a significant loss of emotions that should be, in-general, associated to something like advertisement storytelling. This is where Ameritest distinguishes itself.

Advertisements in various forms- be it a brochure, TV, radio, social media, billboards or packages are all about storytelling. If the content of the story being told is highly engaging, adverts create a sharp rise in sales. Ameritest helps tweak the messages in advertisements to change perceptions and future purchase behavior to drive sales. The company further also helps understand the power of the creative to drive the campaigns. It also makes suggestions and offer solutions to make changes so as to attract the desired attention to your ad campaign. It also looks for cues that indicate that the story being told is going to be retained in people’s long-term memory.

Communication is the key

The whole idea of having a ‘Brand’ is delivering something that sets you apart. To put the word out for the people to see what you represent, you need to know what space you will be occupying in the market. If you know what space you are going to occupy in the market, then the consumer may let you extend your presence in this space. Ameritest’s suite of products helps in identifying and relaying the message of your brand in the best way possible. This will help you reach your goals.

Once the ad campaign is done. There is a need to know about what the consumers are interested in and whether the ad campaign will remain in consumer’s mind for a long time. This is measured by Ameritest by analyzing the impact the ad campaign has across various mediums. This gives you as a business, the idea of how each ad works for you and the effect it has. Modulating the frequency of ads based on this kind of research can significantly affect the consumer’s impression of your advertised product. Ameritest does this through Ad Tracking, In-market Creative Testing, Creative Effectiveness Post testing and Brand Health Tracking.

Ameritest has six David Ogilvy Research Awards to its name that also includes the Grand Award for its work with IBM’s “Blue Letterbox” ad campaign. It has helped Fortune 500 companies develop their brand strategy for a long time and continues to do so. It has been in the ad research field for a while now and continues to evolve.

He spent his early years in ad research working at the world-renowned Leo Burnett Worldwide Inc. It was here that he had the exposure to the words and numbers that gave him insights into the Ad Research business. But he felt that there was a lack of emotions when it came to Ad research.

He shifted to Albuquerque, New Mexico to establish a new system. He collected a group of talented individuals to start an Ad Research firm. Then he founded Ameritest to input the non-verbal feedback into an advertising research system. He was a volunteer for the Peace Corps in his younger years and has also written novels. He has a Bachelor’s Degree in Mathematics and MBA in Finance from the University of Chicago.

“We decode the visual language of advertising using our proprietary Picture Sorts to better understand how your advertising is working and the long-term brand memories it creates.”

“Our metrics have been proven to predict sales, usage, and awareness to help successfully grow your brand.”

“Our visual and diagnostic tools allow us to define the essence of your communications and measure their long-term contribution to your brand via the memories they create.”