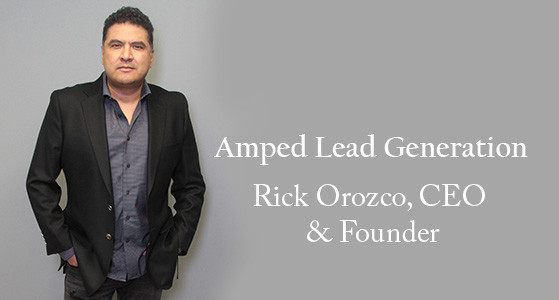 Real estate is changing fast. Gone are the old ways when people used to rely on realtors for anything and everything related to buying a home. And Realtors in turn had to be active physically to gain an edge on their competitors. Today, people search for homes online. But at the same time they are looking for mortgage lenders, and perhaps even furniture. This data is precious and it helps businesses and realtors target prospective clients and customers. With its lead generation innovation, Amped Lead Generation enables Lender Partners and Realtors an edge through its marketing swagger.

We interviewed Mr. Orozco to know more about his inspired leadership and his journey to founding Amped. Here are the excerpts from the interview.

Q. What motivated you to enter such an intensely competitive and risky field of business?

I have always been a dreamer. I wanted to be a singer since I was a child, and I pursued that career and signed with Arista Records in the 90’s. I was published by EMI Nashville as a writer and found great success, and still enjoy success today in the music business. Music is a very competitive and cut-throat industry. So, no industry scares me.

Eventually, I ventured into sales. I found the hardest part of sales was in attaining the right clients, and no matter how much I trained people, some just could not accomplish their goals. Hence, I built Amped Lead Generation to solve that problem. It was a long road to get it working, but me and my team figured it out, and now enjoy great success.

Q. What were the biggest initial hurdles to building your business, and how did you overcome them?

The biggest hurdle was getting a mortgage bank to believe that a consumer direct platform for purchase business could be built successfully. The industry is built around realtors bringing the banks the business. Loan Officers do not know how to market directly to the consumer. But I convinced a few banks to give me a shot. The issue then was the failures – as the algorithm I was using, was learning. I lost a lot of my own money, and in the beginning it was a slow process to get it right.

People are not patient while investing capital. I just had to keep pushing on until I made it work,  and unfortunately lost a few clients along the way.

Q. What do you hope to accomplish in the long run?

The goal is to eventually partner with a large bank and take the company nationwide, and take that bank to the top. By the time someone else figures my system out it will be too late, as I currently own almost 8,000 domains in the U.S. in the top 100 cities. My closest competitor starting now is lightyears behind me.

Q. What’s the best thing that happened to you recently -- either at work or outside?

My health has improved significantly recently. I have had a rough ride the last five years with 5 herniated discs in my spine. I finally found a great surgeon and he solved the biggest problem. During this rough time, my wife of 20 years, Oriana and I, became even closer, and I have spent a lot more time with my three sons. It was a true blessing in disguise to be at home more as I built my business. I had more time with my loved ones, and I had more time to focus on the intricacies of targeted lead generation

Q. If you had one piece of advice to someone just starting out, what would it be?

Whatever you decide to pursue, you must be 110% committed and passionate about your vision. Passion is the fuel you will need to keep going when the world tells you to stop. If you are not passionate about your vision to the point that it keeps you up at night, then don’t do it. You will only quit on yourself when it gets tough. I have found that only people that can walk through the fire of failure long enough can come out the other side winning. Passion and commitment are necessary to getting there.

Q. What would you say is the single most influential factor that has contributed to your success?

I would certainly say the biggest factor to my long term success in four different industries has been due to my relentless pursuit of changing myself. I am always looking for an edge. I do not walk into things, I run full force, and I am alright with failing. Although failing is not fun, it does not scare me. I would rather try and fail than not try at all and not gain the edge I am looking for.

He also has a great musical background. His compositions were first signed by EMI Nashville Publishing.

His musical career has taken him around the world and has got him four Grammy nominations. He also co-wrote an Amazon bestseller Think Big with Brian Tracy.

“Whatever you decide to pursue you must be 110% committed and passionate about your vision. Passion is the fuel you will need to keep going when the world tells you to stop.”