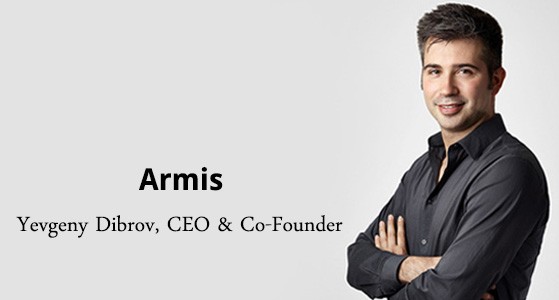 The pace at which the use of connected devices is proliferating in enterprises is far beyond the reach of IT departments and corporate cybersecurity experts. "In the rush to embrace the productivity value of wireless, internet-connected devices, companies are often overlooking and discounting what could be very real security risks," explains Yevgeny Dibrov, CEO and co-founder of Armis. From unmanaged laptops, smartphones, to smart TVs, printers, HVAC controls, badge readers and medical or industrial devices, these connected devices create the new attack landscape. Armis lets businesses see every device, locally and remote, and understand what each is doing, identify associated risks, and stop attacks. Armis is the Agentless IoT security platform that lets businesses discover, profile, and sanction the devices around them.

Armis eliminates the IoT security blind spot, protecting enterprises from the threat of unmanaged or rogue devices and networks. Armis using its award-winning Agentless IoT security platform discovers devices on and off the network, continuously analyzes endpoint behavior to identify risks and attacks, and protects critical information and systems by identifying suspicious or malicious devices and quarantining them. Armis is headquartered in Palo Alto, California with offices in Tel Aviv, Israel.

Having worked with several enterprise customers across a broad range of industries across the Fortune 1000 including healthcare, high-tech, manufacturing and more, Armis has discovered that at least 40% of the connected devices belonging to a business remain hidden or unanalyzed. Armis understands that these unmanaged devices are active endpoints vulnerable to attackers who can disable them, breach networks, spread ransomware, or steal critical or sensitive information. Armis solves this problem by easily and immediately identifying every device in an organization’s environment — all without using agents — and eliminating the risk they present.

Armis’ Agentless Security Platform was recently named a Silver award winner in the Internet of Things Security (IoT) product category, and a Bronze award winner in the Best Cybersecurity Company (between 50 to 99 employees) category by the 2019 Cybersecurity Excellence Awards. “Armis is helping companies across every vertical safeguard against these types of attacks, and winning in two categories in this year’s Cybersecurity Excellence Awards highlights how we’re addressing the need for comprehensive visibility over managed, unmanaged, and IoT devices in the enterprise,” said Mr. Dibrov.

Armis saw the need for a strong security layer for the ever-growing Internet of Things. Knowing that it is impossible to monitor and secure these devices individually with a dedicated agent, Armis has created a growing database of more than 5 million devices and their expected behaviors. This database is always checked for devices’ behaviors in a given environment to understand if it’s an expected outcome. When it’s not, Armis may shut it down and alert the customer, depending on how it’s configured and how severe the problem appears to be.

“To build and agent-less platform, we [look at] existing infrastructure, traffic, wireless infrastructure and network infrastructure, to get a huge amount of traffic information. We analyze and detect and get a fingerprint of every device and asset in the environment and leverage the 5 million devices in the knowledge base,” Mr. Dibrov said.

Mr. Yevgeny Dibrov is the Co-Founder of Armis, Inc. and also has been CEO since July 17, 2017. Mr. Dibrov served as the Head of Global Business Development for cloud security company Adallom (acquired by Microsoft). He is a Graduate of Technion, Israel Institute of Technology. He served with co-founder and CTO Nadir Izrael in the elite Unit 8200 of the Israeli Defense Forces.

“It can’t be denied, however, that in the age of increased social-engineering attacks and unmanaged device usage, reliance on a human-based strategy is questionable at best…  It is time to relieve your people (employees, partners, customers, etc.) of the cybersecurity burden,” Mr. Dibrov suggests using the Armis Agentless IoT security platform instead.

“Our mission is to eliminate the IoT security blind spot, letting enterprises use IoT and unmanaged devices safely and securely.”

“We can stop devices [in a business environment] from connecting to an inappropriate network or those exhibiting anomalous behavior, regardless of whether those devices are managed by IT or not.”