At Imagine Communications, we develop the technologies that enable our customers to deliver all the moments. Anywhere, anytime, on any device. 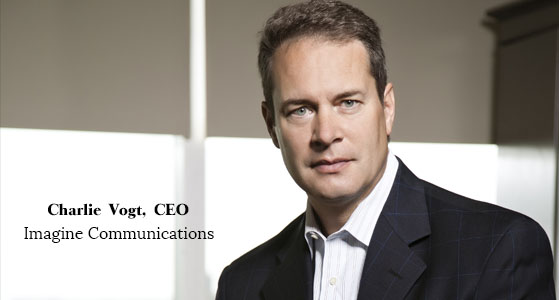 At Imagine Communications, we develop the technologies that enable our customers to deliver all the moments. Anywhere, anytime, on any device.

Technological innovations are widely applied to the creation, distribution, and consumption of entertainment content. People can now create, exchange, search, publish and download any digital content without even leaving their homes.

For most media companies trying to adapt to the change, the big issue is technologyâ€”specifically, the digital platforms and technical skills necessary for traditional media companies to play in the new game. And itâ€™s not just any game, but a fast-moving, rapidly evolving contest in which digitally enabled capabilities such as the speed to market of new functionality and instant adjustments to consumersâ€™ use of content are as critical to success as traditional creativity and content production.

Adapting to the digital advancement is not easy, but it is the key to the media and entertainment industryâ€™s triumph and Imagine Communications plays a pivotal role in making their clientsâ€™ journey successful.

CEO Charlie Vogt recognized that the media and entertainment industry needed to undergo a massive transformation away from traditional proprietary hardware and toward IP, software and cloud-based technologies that would provide the flexibility, scalability, and agility needed to compete and keep up with consumer demands. By splitting the company into two, both Imagine Communications and GatesAir could be laser-focused on innovating on separate ends of the technology spectrum. Imagine Communications was created to innovate for the media and entertainment markets, leading them to a future defined by IP, software, the cloud and TV everywhere.

Today, nearly half of the worldâ€™s video channels traverse its products, and its software solutions drive nearly $50 billion in global ad revenue for its customers. Through continuous innovation, the company is delivering the most advanced IP, cloud-enabled, software-defined network and workflow solutions in the industry.

Earlier this year, the company launched the Open Zenium initiative, which opens up its library of microservices to customers and partners. For several years it has been building solutions based on microservices technology, which allows for the migration of media operations â€“ even the most demanding ones â€“ to fully virtualized, IP-based environments running on standard computing platforms.

Zenium is the industryâ€™s first and only cloud-native microservices platform for architecting, implementing and managing workflows. And while competitors are just now starting to embrace the concept of microservices, Imagine is taking the next step and opening up this library so that media companies have the tools and technology needed to fortify their operations with the flexibility, efficiency, and scalability needed to respond rapidly to changing market dynamics.

In April 2015, the media industry witnessed a watershed moment when Disney/ABC Television Group unveiled a collaboration with Imagine Communications to transition its broadcast operations â€“ global programming playout, delivery and network operations â€“ to IP cloud architecture. By leveraging the agility and scalability of IP and cloud technologies, Disney/ABC Television Group is able to move beyond the constraints of traditional proprietary â€œbig ironâ€ broadcast infrastructures that have dominated the broadcast industry for decades, enabling them to expand their programming and enhance revenue-generating possibilities, efficiency, and flexibility. Since that announcement, Imagine has engaged with dozens of media and entertainment companies around the globe to complete similar IP-based customer installations. Imagineâ€™s vision for a software-based technology transformation of the media and entertainment industry is now a reality.

The media and entertainment industry will experience more change in the next five years than it has in the last 50 as it moves away from legacy infrastructures and towards next-generation IP, software and cloud-based solutions. With the most comprehensive portfolio of video and advertising solutions, Imagine Communications is providing the technical pathway and vision that broadcasters, TV networks, and content creators need to remain relevant and competitive in todayâ€™s multiscreen world.

Imagine Communications combines the resources of a mature, global company with the flexibility and nimbleness of a startup to quickly innovate and deliver the most advanced IP, cloud-enabled, software-defined network and workflow solutions in the world.

The company will also continue to work to help broadcasters unify over-the-air and broadband workflows. This will be critical to their success, as it enables media companies to harness new business and distribution capabilities and offer localized, personalized targeted content and advertising.

â€œNo matter where the media business is headed next, chances are, Imagine Communications is going there too.â€