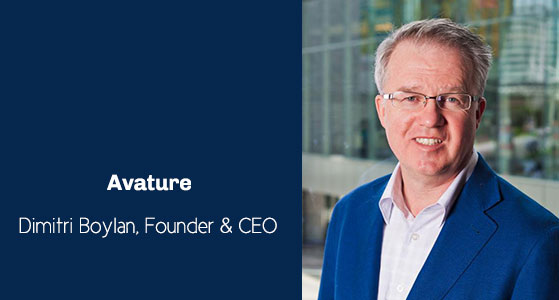 Traditionally, software vendors have often failed to deliver technology that is needed for an effective Talent Acquisition and Talent Management. Bad technology decisions, replacement of the R&D and bad acquisitions have caused such rigid and incompatible suites that are not good for businesses. Businesses need unique solutions that fit their specific needs. Avature with its single platform and solution-oriented approach have repeatedly sorted such issues by treating them as a business optimization process and not a technical challenge.

Avature has its roots in HotJobs.com, which was a premier job portal of its time before it was acquired by Yahoo! in 2002 for $433 million. After the acquisition, Dimitri Boylan founded Avature. He was convinced that the leading recruiting software companies were not helping their customers leverage the latest technology to gain a competitive advantage. Avature was set up to redefine software based on Web 2.0 as the internet became more relevant to people’s lives. After a brief time with Yahoo! for several years the team chose to join Boylan at Avature.

The company started its journey by working on developing a powerful Federated Search Technology called WebSources. The technology soon became quite a rage with the recruiting professionals to source specialists.

Cutting-edge Talent Acquisition and Talent Management require new thinking and innovative solutions. With this belief, they next focussed in candidate engagement because they felt that the CRM products were simply not suitable for recruiting. Hence, for a passive candidate engagement, they designed branded email marketing features which helped with this.

With the progression of time, they have been able to combine the usability of systems like Facebook to support high impact business activity. The Avature platform, supported by the customer feedback accelerates the application development cycles. With Avature helping companies, innovations like Android, iPad, and HTML 5 are never too far away from availability.

Avature continues to find new ways to innovate in software to help its customers pioneer their business practices and give them a competitive edge. With their unique software development cycle, they update their code every few weeks time.

Over 650 companies across the world use the Avature platform to transform their HR practices. Among these, hundred of their customers feature among the Fortune 500 and 7 of these are from the top 10 Fortune 500 companies.

Before founding Avature in 2004, Mr. Boylan co-founded HotJobs.com in 1997. He worked here at the capacity of a COO and later as a CEO. He took the company public in 1999. Under his leadership, the company grew into a giant which brought in $100 million in revenue. HotJobs.com was acquired by Yahoo! in 2002 for $433 million. At this point, HotJobs.com was the 49th most visited site on the internet. Between 2002 and 2009, Mr. Boylan served on the Board of Directors of Zhaopin.com, the second largest employment website in China.

He has appeared on CNNfn, CNN, Fox News, The Fox News’ Cavuto Report, and CNBC Power Lunch. He has been also featured in Business Week, The New York Daily News, Investor’s Business Daily, and other print publications.

He obtained his BA in biophysics from the University of Pennsylvania. His graduate research has been published in over 30 scientific publications.

“As Avature has grown as an organization, we’ve been able to grow with them. They’ve been a great partner for us because they’ve really listened to our feedback and questions. Avature values strong relationships and consistent quality, the same ideals that SapientRazorfish aims to deliver to candidates.” – Kristina Palmer Shedd, SapientRazorfish - VP of Talent Acquisition

“We needed a platform that focused on relationships rather than only linear processes. One of the best things about Avature is how malleable the system is, so we’re really able to change things for how we want it to look.” – Alan Gregg, Specsavers – Talent Acquisition Managers

“One critical reason why we chose Avature ATS was to create a holistic data model, that supports both the pipelining of prospects as well as the handling of active applications. Avature enables a seamless integration where it matters. It is the agile & responsive backbone to our TA technology landscape, supporting our candidate, our recruiters and our hiring managers along the entire recruiting journey.” – Sebastian Hubert, Siemens – Head of Startegy and Technologies.

“At Avature we see things differently. Rather than struggle with too many separate systems that do not really communicate with each other, we believe in a one platform approach.”

“On the Avature Platform, you can build the right solutions at the right time and transform implementations into opportunities to bring people together to seek out and design digitally enabled programs that have a real impact on the business.”