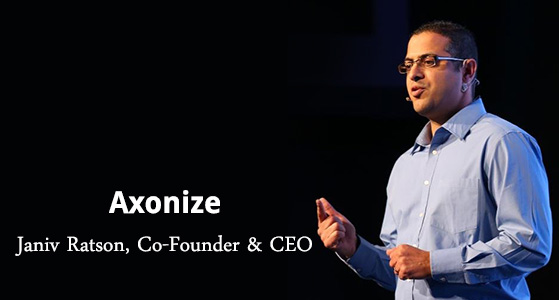 The IoT platforms of today are expensive, complex, lengthy and resource-demanding. On this, the IoT platforms for a long time have remained the same. It takes a huge team of developers to develop code for each business which in turn makes scaling and profiting very difficult. But a company based out of Tel Aviv, Axonize, is changing this.

The company was founded by Janiv Ratson and a team of three IoT experts in 2015. Combined these four had previously connected over 25 million devices to the platforms they had developed. The founders were of the view that most of the IoT platforms were essentially the same. They were fed up of re-developing the same model again and again. They felt that something was wrong with the picture. “Fed up, we started to realize that something had to change, fast” said Janiv Ratson, CEO of Axonize.

Motivated by this feeling, they set out to create something new. They wanted to produce a single IoT platform which could handle all kinds of businesses, verticals, and sensors. The idea was to go beyond making just smart products; they were inspired to create secure smart enterprises for service providers. They wanted to do this with great speed and by using lesser resources.

Many companies get excited by the idea of using smart product platforms and leveraging IoT to gain from the technology but end up discovering such an approach doesn’t work. Axonize is changing this. Its expertise with IoT orchestration helps it create hyper-scale projects with minimal resources to profit quickly.

IoT projects are best started on a smaller scale. This is because IoT brings a level of sophistication to an enterprise’s operation as the technology is leveraged to drive efficiency. So, it is best when an enterprise starts small and scales the projects by integrating more devices, protocols and systems. This also brings in the possibility of implementing ideas within hours and presenting to the customers swiftly. And as a company sees the returns coming in from the smaller projects, the company could scale to larger ones.

Axonize supports this approach. Axonize with its technology works for the service providers keeping in mind their end customers. Their technology can enable a company to orchestrate and monitor all their customers and systems from a single dashboard.

Axonize has revolutionized the way IoT projects are handled. It has been able to launch as many as 1,322 projects in a year’s time where the average time taken to complete a project is 5 days! It is unimaginable in this market considering such projects take months for completion. Axonize seems to be THE company that has cracked the code when it comes to turning in IoT profitability.

Deutsche Telekom presented Axonize with a challenge where they gave the company the sensors and a use case to build a platform around. What surprised the German giant was that Axonize was able to come up with a platform within just two hours.

Deutsche Telekom had earlier looked at various potential partners and did some rigorous evaluation before placing its faith on Axonize. The German MNC wanted a partner to work on their IoT strategy. Together, Axonize and Deutsche Telekom built a key platform on the Microsoft Azure. They worked together to implement the strategy for their German and European customer base. Currently, they are addressing their first customers on the platform together with Axonize.

Axonize in its few years of existence has raised funds from VC’s and strategic investors, including Microsoft ScaleUP Tel Aviv, Deutsche Telekom, and CornerStone Venture Partners. The company has succeeded in also gaining many market-leading customers from across the globe which features big names like Deutsche Telekom, Groupe Tera, Singtel, and Bezeq.

Mr. Ratson is an IoT pioneer. He has designed and built IoT backend servers for four different companies over many market segments in the past 18 years. Over this period he has taken some large scale consumer and enterprise products from idea to fruition. He has led large R&D groups and has supported millions of users worldwide at Schneider Electric, Essence Security, Superna and many more. He has a Global MBA from the IDC Herzliya, Israel.

“Axonize is a rapidly growing company, developing an industry-changing IoT platform that empowers the biggest brands in the world.”

“We believe that IoT is not just a platform, but a journey to successfully grow your IoT business.”