DiaCarta: Dedicated to the Science of Impact 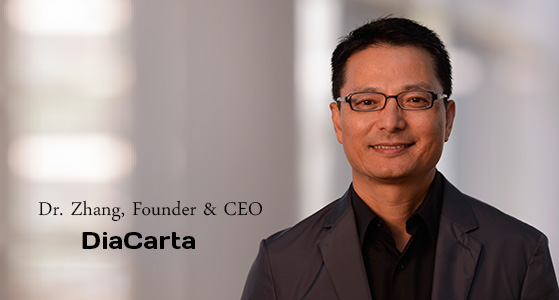 DiaCarta: Dedicated to the Science of Impact

Molecular Diagnostics has evolved over the years and the numerous benefits it has to offer has earned people’s attention irrespective of the expensive procedures it included. Quicker turnaround times, improved sensitivities, increased accuracy are a few of its many unbeatable advantages. DiaCarta is one established molecular diagnostics company aiming to democratize diagnostics through their quick and affordable tests and products.

Aiguo Zhang and Paul Okunieff together founded DiaCarta, back in 2011. Dr Paul Okunieff is a Radiation Oncologist from the University of Florida, Shands Hospital. Dr Aiguo Zhang is an expert in the biotech and pharmaceuticals industries who played a key role in Panomics, Inc. Aiguo founded DiaCarta after Panomics got acquired by Affymetrix. He founded DiaCarta to make a difference in medicaldiagnostics, because “it really is in the dark ages,”says Dr. Mike Powell, Chief Scientific Officer (CSO) at DiaCarta.

DiaCarta is a translational genomics and personalized diagnostics company based in Richmond, California. They offer the healthcare industry highly sensitive detection technologies and diagnostic solutions. Faster diagnosis and platform-agnostic technologies make them outshine their competitors and the old techniques which are expensive and time-consuming. “Current practice involves a tissue biopsy wherein a piece of the patient’stumor is surgically removed (if possible) and is treated with formaldehyde and fixed in paraffin wax (so called ‘Formalin Fixed Paraffin Embedded – FFPE’) … and microscopic analyses and staining tests are conducted by pathologists. After which there is nothing much left for us molecular folks to operate on,” says Powell. “The medical oncology community were in need of a new system that helps them to rapidly monitor mutations in the tumor DNA that is found in cancer patient’s blood… so that they can find the ‘Needle in the Haystack’……..” he added.

DiaCarta’s Clinical Service Lab at Nanjing, China is the world’s largest sequencing center that houses million-dollar instruments that facilitate sequencing, and the company is currently involved in the “One-Million Genome Project” which plans to do Whole Genome Sequencing (WGS) on one million Chinese individuals hence the need for a large number of IlluminaNovaSeq NGS machines. Dr. Powell, talking about a paper released by the company last year, said that it presented facts revealing errors in the traditional and widely used methods of tissue biopsy analysis. The paper published in the August 2017 issue of Clinical Chemistry showed that a large portion of mutations in tissue biopsy (FFPE) from lung cancer patients were not derived from the patient’s tumor DNA, but were as a result of the chemical procedures which induced mutations that do not reflect the original genetic landscape of the tumor and these were very important drug resistance mutations that could lead to wrongful decisions for subsequent therapy.

DiaCarta collaborated with the Olivia Newton-John Cancer Research Institute (ONJCRI) in Australia. The latter had implemented a very sophisticated digital droplet PCR technology that requires new hardware and highly-skilled technicians to operate. Whereas DiaCarta’s technology can be utilized on existing real-time qPCR instrumentation. The researcher’s at ONJCRI utilized DiaCarta’s XNA clamping technology to develop a highly sensitive orthogonal pyrosequencing test to validate their ddPCR results. DiaCata’s technology makes it more convenient for the pathologists to continue using the already available instruments in the laboratory to perform highly sensitive clinical tests. DiaCarta currently has the most sensitive lung-cancer liquid biopsy assay which is compatible on existing qPCR machines.

XNA is like-DNA with different totally unique backbone chemistry. It binds very tightly to any wild-type nucleic acid template sequence, but if there is a genetic variation in the sequence it melts off. This miraculous mechanism helps track the tumor DNA faster and with ease. The XNA, in the patient derived DNA-sample, will only allow selective amplification of mutated tumor alleles and leaves the normal wild-type DNA unamplified. “This is like the Holy Grail of Medical Diagnostics,” says Powell.

Traditional next generation sequencing (NGS) methods perform “deep sequencing” – which involves multiple reads (often as much as 60-100,000) to find the mutant DNA. The process is also more prone to errors. The real challenge is to determine from the results obtained if there was a real mutation from the sample DNA or if it was a result of an error introduced during the sequencing procedure.

This often either requires orthogonal testing to validate the results or repeat tests which make these techniques very expensive, time-consuming and not so reliable. However DiaCart’s OptiSeqTM NGS is powered by XNA, which allows the selective enrichment of all low frequency ‘actionable’ tumor derived mutant alleles during the NGS library preparation step and consequently DiaCarta’s NGS method requires only a few thousand reads to identify the mutant DNA, and hence is a quick and affordable solution, suggests Powell. The XNA oligomers bind to native DNA by normal ‘Watson-Crick’ base pairing but the entropy of the binding is significantly different than normal DNA due to the unique structure of the backbone; which ensures that only variant DNA’s are free to be amplified by any primer directed polymerase either via PCR cycling or isothermal amplification.

SuperbDNA and DigiPlex Genotyping are the other technology solutions of DiaCarta. The company implements the Branched DNA (bDNA) technology to quantitatively detect specific and smaller amounts of nucleic acid sequences directly from the source. DiaCarta’s Magnetic Bead Capture Technology provides an accurate, flexible platform for the digital multiplexing of both proteins and DNA with bar-coded beads and delivers a high multiplexing capability from a single-tube multiplex PCR reaction.

DiaCarta also has developed a highly-sensitive multiplex real-time XNA-qPCR based ‘in vitro’ diagnostic test for early detection of colorectal cancer called ColoScapeTM– which implies ‘TheLandscape of CRC Mutations’. The ColoScapeTM test analyzes more than 20 mutations in 4 tumor ‘driver’ genes that are implicated in the oncogenesis of colorectal cancer and can be performed on existing qPCR instrumentation platforms

Misdiagnosis is a big problem, says Powell. To treat patients or to make them undergo chemotherapy for a misdiagnosed, unreal mutation can have adverse effects on the patient’s health. DiaCarta has developed the only assay available that can monitor radiation therapy – a Radiotherapy Companion Diagnostic Test. DiaCarta has a contract with the National Cancer Institute to develop that as an FDA approved the test. This unique test monitors the patient’s response to localized radiotherapy. The test monitors the DNA in the bloodstream and also indicates toxicity effects by monitoring the amount of apoptotic DNA derived from both tumor and normal tissue and provides a direct guide when to halt the radiation process.

Dr. Zhang, the Founder and CEO, is an active entrepreneur and executive in the biotech and pharmaceutical industries with extensive experience ranging from startups to major corporations, including GainPep, Kodia, Panomics, Affymetrix, and Bio-Rad. He received his Ph.D. from Simon Fraser University in molecular toxicology and pharmacology. He was a postdoctoral scholar at the University of Massachusetts and served as an assistant professor of research at the University of California, Berkeley. Dr. Zhang has published many research papers in leading scientific journals. His inventions are the subject of many patents and patent-pending applications.

“We should democratize diagnostics… People should not have to wait for three weeks to know if they have Cancer.”

“Our technology does not need special hardware or skilled technicians, we have  agnostic-instrumentation. Our chemistry works on all platforms.”

“We are committed to the excellence of precision medicines… to providing quality products that meet the need of the customer.”