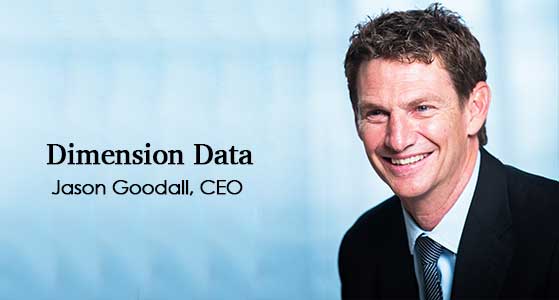 Dimension Data: We Accelerate Your Ambition

The power of technology is helping businesses achieve great things in the digital age. As every business undergoes its digital transformation, they need a partner that can accelerate their ambitions through digital infrastructure, hybrid cloud, workspaces for tomorrow and cybersecurity. Dimension Data is one such company that has been enabling companies with their digital transformation through its services.

A member of the NTT Group, based out of Johannesburg, Dimension Data is a specialist IT services and solution provider that helps its clients plan, build, support and manage their IT infrastructures. The company is positioned today as a leading innovator in networking and communications in 51 countries across five regions – Middle East & Africa, Australia, the Americas, Asia Pacific and Europe.

To Do Great Things

Dimension Data was founded in 1983 with a simple vision- “to do great things”. The company which began its operations from the continent of Africa began to expand rapidly by casting a wider net. One of the pivotal moments came for the company when it brought on Cisco as its primary networking partner. The partnership has stood the test of times.

The company was listed on the London Stock Exchange at the turn of the century. This accelerated Dimension Data’s ability to bring up the technology value proposition to its clients. The company was able to go beyond networking into security, contact center, and IP telephony. Between 2000 and 2004, Dimension Data also made several acquisitions which gave them a foothold in new markets like the UK, Europe, and North America.

The period after 2005 was crucial for the company as it entered into managed services. It developed service delivery processes and platforms to improve their services by taking on more ownership of business outcomes. The company also expanded its operations in North America, the Middle East, and Africa.

Welcoming the new decade in 2010, Dimension Data acquired OpSource, Xigo, and BlueFire. This enabled the company to accelerate the creation of cloud platforms and services. One of the largest ICT companies, NTT acquired Dimension Data.

2014 was again an important year in the company’s history as it made important acquisitions- NextiraOne and Nexus IS- that enabled the company to scale its networking capabilities and expand in the northern hemisphere. The company also had the pleasure of hosting the world’s very first cloud-enabled G20 Leader’ Summit.

Cycling touches the lives of everyone at one point or the other. It is also a sport that is followed by billions of fans across the globe. In 2015, A.S.O. (Amaury Sport Organization), the owner of Tour de France signed a five-year deal with Dimension Data to transform the viewership experience of cycling events including the Paris-Nice, Critérium International, Paris-Roubaix, la Flèche Wallonne, Liège-Bastogne-Liège, Tour de Yorkshire, World Ports Classic, Critérium du Dauphiné, Tour de France, la Course by le Tour de France, la Vuelta a España, and the Paris-Tours. As the official technology partner of A.S.O., Dimension Data delivers the best race information in real-time with race commentators for the global viewing public.

In the Middle East and Africa alone, the company is a $1.3 billion systems integrator and managed services provider. It is today evolving technology environments to enable their clients to leverage data in the present digital age.

Dimension Data employs 15,000 employees across three continents. It is driving innovation to bring together the world’s best technologies from consulting, technical and support services to fully managed service.

A chartered accountant by qualification, Mr. Goodall has held senior board-level positions in several organizations in the past fifteen years. In the year 2009, he was named the ICT African Business Person of the Year. He joined Dimension Data as the Managing Director of Middle East and Africa. In 2010, he became the company’s COO until he was picked as the Group’s new CEO in 2016.

Prior to Dimension Data, he served Internet Solutions (a subsidiary of Dimension Data) as its COO. Before that, he was the CFO of OmniLink.

He’s a keen sportsman. He enjoys distance running, cycling, and triathlons. He serves as a Non-Executive Director of the Sunshine Golf Tour in South Africa.

- The company won the Marketing Society Award in 2018

“Dimension Data has been harnessing the power of technology to help organizations do great things for more than 30 years.”

“We help you drive and manage your innovation through our enterprise-grade consulting, technical and support, and managed services.”

“Our skilled professionals offer you the expertise you need to optimize your organization’s digital journey.”