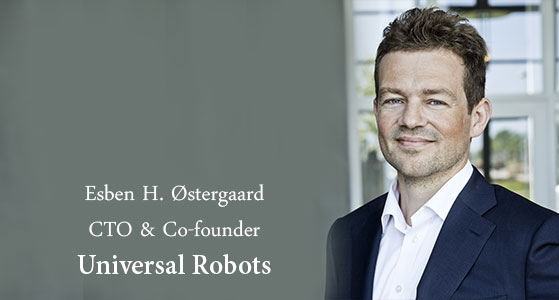 “The UR cobots represent a fundamental paradigm shift in the way robots are viewed.”

Robots have radically changed the way industries function. These human-like machines are capable of doing various tasks that are difficult for humans to do. From the manufacturing to the hotel and hospitality industry, robots are gaining popularity as they help decrease human workload. A front runner in collaborative robotics is Universal Robots manufacturing robot arms now used in close to 25,000 production environments.

It all started in the Danish food industry where the founders were working on their Ph.D. project on finding automation solutions for high mix/low volume processes. One simple process they were trying to automate was putting pepperoni on a pizza. “When we started researching the market solutions, we found that the only robots available were unwieldy, heavy, expensive, very complex to program and had to operate inside safety cages,” explains Esben H. Østergaard, the CTO and co-founder of Universal Robots. That’s when the idea of Universal Robots was conceived. They discovered a significant need in the market for lightweight, flexible, easy to program robots that could work right next to people with no safety guarding. And that’s how the team’s first robot model, the UR5, became the first commercially viable collaborative robot, or cobot.

The Qualitative Change of Robots

The barriers Universal Robots face in deploying cobots are mostly educational barriers, as many potential customers still regard robotics as heavy, expensive and very complex to program – and as a solution that ultimately gets people fired “We need to see the robot as a colleague that works right next to us in close collaboration, not simply as a machine that takes over manual labor,” explains Østergaard.

In manufacturing environments where the UR cobots are now installed, employees with no prior programming experience can be promoted from operators to robot programmers as the robot takes over the “3D jobs” – the Dull, Dangerous and Dirty. The results are employees freed up to focus on more rewarding tasks – both financially and mentally.

Østergaard believes that putting knowledge back to the factory floor will perhaps be the best long-term result derived from leveraging collaborative robots. He believes that the industrial revolutions created enormous wealth, but at the same time removed passion and knowledge about the product from production itself. “If we can close that gap again — if we can somehow mix people and machines in the right way on the factory floor, we see enormous potential there for value adding, rather than just cranking up production levels. It’s qualitative change,” he says.

With traditional robots, the capital costs for the robots themselves account for only 25-30 percent of the total system costs. The remaining costs are associated with robot programming, setup, and dedicated shielded work cells.

The “out of box experience” with a collaborative robot is typically less than an hour. That’s the time it takes to unpack the robot, mount it, and program the first simple task. The UR cobots also take up much less floor space than a “traditional” industrial application as they typically don’t require safety cages (depending on the risk assessment), due to the built-in safety system that makes the UR robot stop when it encounters obstacles in its route.

“Average payback period for UR robots is the fastest in the industry and we have seen the robot pay itself back in as little as 1-2 months,” explains Jürgen von Hollen, the President of Universal Robots. “The term “collaborative” not only means that humans can collaborate directly with the robots potentially with no safety guard between them, but the term also addresses the ease of use. A robot is not truly collaborative if it’s not easy to work with,” he adds.

Today, there is a continued growing demand for collaborative robots. Small and medium-sized companies have not typically been able to afford industrial robotics due to lack of in-house programming capacities and limited capital spending budgets. But, this is a prime target for cobots. UR experiences a shorter sales cycle with this type of customer as their decision-making process is faster and they realize how quickly the robots will pay themselves back. “We are not necessarily taking market shares away from existing robot manufacturers, we’re spearheading a whole new market,” notes von Hollen.

The Paradigm Shift in Robotics

Universal Robots is helping everybody with a desire to learn the concepts of cobots with its free, online learning platform, Universal Robots Academy. It gives an introductory session necessary to master basic programming skills. It is quite unusual in the robotic industry to make robot training of this caliber available for free, but this is a long-term investment for the company.

“We are facing a looming skills gap in the manufacturing industry that we need to bridge by all means possible,” says von Hollen. “Facilitating knowledge creation and access to our robots is an important step in that direction.”

Another initiative that is helping Universal Robots cement its market leader position is the UR+ platform. “With UR+ we have created a platform that leverages our innovative global ecosystem,” explains von Hollen. “It’s akin to an “app store” for our robots that enables 3rd party developers to create certified plug & play products for UR robots such as grippers, vision system, and other peripherals.” The UR+ showroom now features 62 Certified UR+ products with 238 approved commercial developers in the program.

The company has sold more cobots than all competitors combined and plans to maintain its market share and momentum by continuing to invest heavily in R&D and out innovate competitors.

Jürgen von Hollen is responsible for leading Universal Robots through a period of explosive growth, driving the adoption of easy to use, safe, and economical cobots across the globe. He has extensive international experience living and working in 8 different countries across Europe, America, Asia, and Africa.

Jürgen von Hollen began his career with Daimler-Benz Aerospace and held senior management roles at Daimler-Chrysler Services, Deutsche Telecom, and Pentair. He joined Universal Robots in 2016, previously having been the Executive President of the Engineering Solutions Division which includes the Automation and Controls business of Bilfinger SE, in Mannheim, Germany, a leading international Engineering and Services company. He holds a Master of Business Administration from Henley Management College, UK, and has a Bachelors Degree in Business and Politics from Brock University, Canada.

Esben H. Østergaard is responsible for the enhancement of existing UR cobots and the development of new products. During his years as researcher and assistant professor in robotics and user interfaces at University of Southern Denmark (2001 – 2005), he created the foundation for a reinvention of the industrial robot. In 2005, this led him to establish Universal Robots together with two of his research colleagues. Besides his work as CTO, Esben H. Østergaard is participating in national research projects and he is also an external examiner at several universities in Denmark.

Earlier in his career, he worked as a research scientist at USC Robotics Labs in Southern California and also at AIST in Tokyo as a visiting researcher. During his studies in Computer Science, Physics and Multimedia at Aarhus University in Denmark, he focused exclusively on robotics and became world champion in his hobby, robot football, in 1998. He holds a Ph.D. in Robotics.

“We want to raise the robot literacy and the reason for speeding up the entry of cobots is not only to optimize production here and now.”