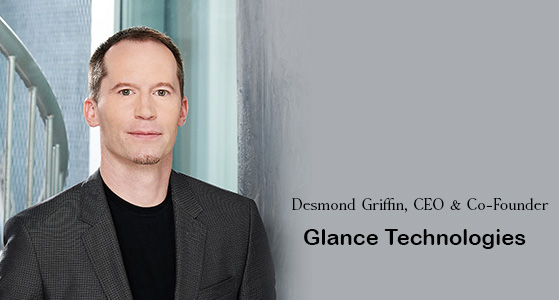 Glance Technologies is honored to be named one of the 30 Most Innovative Companies. “The quick adoption of Glance Pay by consumers and businesses proves our technology is needed,” said Angela Griffin, Chief Technology Officer at Glance Technologies. “We are keeping up with the demand by continuing to innovate new solutions our users want.” Glance Pay transforms how smartphone users settle their bills and track expenses and payment history. Customers can pay by simply taking a picture of their bill, adding a tip, and even splitting the tab without ever handing over their credit card. This cuts credit card fraud while also helping businesses expedite the payment process. For restaurants, this means turning tables faster, enhancing overall operational efficiencies and providing a better customer experience.

Glance showcased the Glance Pay app to 43,000 attendees at the restaurant industry’s biggest event, the National Restaurant Association’s Restaurant, Hotel-Motel Show. “It was such a significant honor for Glance to be chosen by the National Restaurant Association to showcase our technology, as we had to meet strict criteria to be invited,” said Desmond Griffin, co-founder and CEO of Glance Technologies. “The Glance Pay mobile app was designed to streamline the dining experience and help restaurants and other businesses build customer loyalty,” said Griffin.

With that in mind, Glance added new features that allow restaurants and other businesses to offer incentives to consumers with digital loyalty rewards tracked within the app, making it easier for customers to redeem rewards on return visits to the business. Besides earning exclusive deals, users can explore local event and promotion listings. Merchants using the app are geo-targeted, allowing users to discover hundreds of Glance Pay locations across Canada and the U.S.

“To start 2018, Glance Pay celebrated one year of zero fraud system-wide and  record revenue. In May, we expanded our services to allow drivers to pay their parking tickets with a trial promotion. This innovation can help cities worldwide curb a billion-dollar problem of unpaid parking tickets,” said Angela Griffin, Chief Technology Officer at Glance. Glance Pay recently announced their development of a decentralized loyalty marketplace that will be fully integrated with both the Glance Pay mobile payments platform and Glance’s own new crypto token, Glance Coin.

According to the report “Freelancing in America: 2017” from Upwork, it is estimated that 57.3 million Americans are freelancing (36 percent of the U.S. workforce) and contribute approximately $1.4 trillion annually to the economy, an increase of almost 30% since the previous year.

The Glance PayMe™ app can be quickly downloaded to accept Credit Card and Visa/Mastercard Debit payments from Glance Pay users with world-class built-in fraud-protection and digital loyalty rewards without the need for additional hardware.

The beta launch of Glance PayMe™ is an important step as Glance refines its strategy towards targeting new market segments in the freelance or “gig” economy.  Upon full release, Glance PayMe™ will empower users and merchants — from retail and restaurants, to bookkeepers, website and app developers, part-time yoga instructors and freelancers of all kinds.

Glance PayMe allows users to access a full suite of mobile payment solutions with no additional hardware required and a quick, simple set up process.

Because of his coveted industry expertise, Desmond Griffin was invited to speak at the inaugural Blockchain Davos Conference that coincided with the annual World Economic Forum in Davos, Switzerland. “Our plan is to integrate cryptocurrency into everyday life with Glance Coin - it  will give users access to a network of merchants who offer members-only rewards,” said Desmond Griffin.

As a leader in cryptocurrency and blockchain, Glance hosted a sold-out Future of Blockchain Summit. The Summit brought together experts from a variety of fields including art history and healthcare to share how the emerging technology can help their industries.

Glance continues to expand its reach and position itself front and center in the global market withpartnerships with key players in blockchain, including BIG Blockchain Intelligence Group.

Previously, Desmond co-founded PayByPhone (formerly Verrus Mobile Technologies) and was its CEO from inception to successful $45 million exit. Desmond led the PayByPhone team from concept to a platform processing tens of millions of mobile payments annually for millions of consumers in over 100 cities around the world. Desmond is also an active advisor to early-stage technology companies. He holds a Bachelor of Business Administration from Simon Fraser University and holds the Chartered Financial Analyst designation.

Angela has led software development for Glance Technologies Inc. since its inception and brings extensive business and software development experience to the company. Three years prior to her appointment as Glance’s CTO, Angela served as President of Zoink Technologies Inc. She also served 8 years at View Assessments Inc. where she started as a developer and grew to become Chief Technology Officer. Angela holdsa Bachelor of Computer Science from the University of British Columbia.

“We are keeping up with the demand by continuing to innovate new solutions our users want.”

“The Glance Pay mobile app was designed to streamline the dining experience and help restaurants and other businesses build customer loyalty.”