Kumovis: 3D Print Medical Devices – Wherever You Need Them 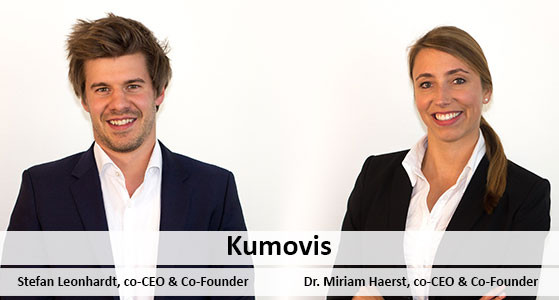 Kumovis: 3D Print Medical Devices – Wherever You Need Them

The world of 3D printing has come along a long way. One of the innovators in this space is technology company Kumovis which is currently innovating to deliver quality 3D technology. It was established in 2015 with the focus on the processing of high-performance polymers approved for medical use, especially PEEK.

The Munich, Bavaria-based Kumovis got its start when five alumni friends from Technical University of Munich came together. Their field of expertise ranged from medical technology to polymer engineering. Together, they founded Kumovis to focus on 3D printing medical devices with high-performance and biodegradable polymers. Within two years of inception, the company was able to launch the R1 3D printer introducing a system for decentralized clean room production to the medtech market. This made the company the leading company to deliver such technology.

The German company is at the forefront of the 3D technology. It delivers a range of products and services including 3D printer installations, on-site trainings and medical product design, among others. Its offering enables additive manufactured individualized implants and small batches of surgical instruments with filaments such as PEEK, PPSU and PLA in a reproducible and regulatory compliant way. More importantly, this innovation helps healthcare workers access these whenever and wherever they want.

In times of digitalization, medtech has embraced the competitive benefits of planning software. Now the industry’s demand for process reliability in 3D printing medical devices keeps increasing. The world of 3D printing has always been an area that has been considered an “upcoming” technology. But the innovations recently have moved forward and Kumovis is at the forefront. The company’s best innovation to date has been the world’s first FLM 3D printer that has been built for medical production. Named Kumovis R1, the printer allows for 3D printing medical devices with materials such as PEEK, PPSU, PEI or PEKK while retaining original mechanical properties.

The Kumovis R1 is equipped with a global laminar air flow, which allows users to heat the build chamber homogenously up to 250 degrees Celsius. The additional local air flow helps users further improve the mechanical properties of their products.

Kumovis R1 has an integrated filter system. Its build chamber can be turned into a clean room to avert contamination in the build part. The 3D printer is “clean room ready” for production in existing clean room environments and can be cleaned to medical standards. Besides monitoring all relevant process parameters, the industrial-grade control system and software used in the Kumovis R1 make process analytics and documentation feasible even in highly regulated infrastructures, healthcare in particular.

The R1 3D printer went into production in 2019 under the leadership of the co-CEOs Dr. Miriam Haerst and Stefan Leonhardt. This effort by Kumovis helped get recognized by Hello Tomorrow which named it as one of the six finalists in the Industry 4.0 path of its Global Challenge in 2019.

The printer has made combination of reproducible quality, mechanical strength, and careful processing with high-performance polymers a reality. 3D-printed implants as well as surgical guides and instruments are becoming more and more popular. R1 3D printer can produce it easily. There are almost no limits to the freedom of design to what the R1 can do.

The German medical 3D printing startup raised €3.6 million in its Series A funding round earlier this year. The round was led by two additional partners in Renolit SE, the manufacturer of thermoplastic films, and Solvay Ventures, the Venture Capital fund of Belgian chemical company Solvay. “Its impressive team, its product quality and performance attributes give us confidence that Kumovis is poised to disrupt traditional manufacturing methods in the demanding medical industry,” said Stéphane Roussel, Managing Director of Solvay Ventures, vouching for the innovation at Kumovis. Kumovis’ seed investors, namely High-Tech Gründerfonds and Ffilipa Venture Capital, participated in the round too.

The investment will help the company further develop its 3D printing technology and improve the R1 3D printer. Owing to the ambitious goals and innovations at Kumovis it has strong backing of TU Munich, the European Space Agency, and several other organizations. Kumovis was also listed among the winners of the Formnext 2018 Start-Up Challenge, alongside several other promising companies. The company also won the Munich Business Plan Competition 2018.

She co-founded Kumovis with Stefan Leonhardt in 2017. Prior to Kumovis, she was a Research Associate and Senior Assistant at Institute of Medical and Polymer Engineering at Technical University Munich.

He co-founded Kumovis in 2017 with Dr. Miriam Hearst. He earned his M.Sc from Technical University Munich and has a MBA from Hochschule Fresenius University of Applied Sciences.

“Explore how high-performance polymers and industry-specific technologies work together in combination at Kumovis.”

“We believe that building up close co-operation and trustful partnerships with other experts is essential to solve today’s challenges of the healthcare sector.”