30 Most Influential Companies of the Year 2020 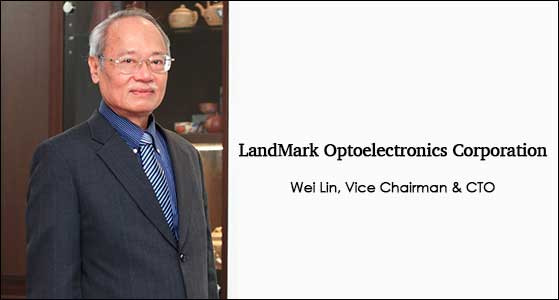 Indium Phosphide (InP) and Gallium Arsenide (GaAs) based epitaxial wafers are undoubtedly the most sought after substrate material for modern-day III-V material semiconductors. The growth of an epitaxial layer over the substrate offers improvements in the applications of optical communication, data center, industrial high power laser and consumer products. Pioneering the development of epi wafers is LandMark Optoelectronics Corporation (LMOC), which is one of the leading suppliers of Gallium Arsenide (GaAs) and Indium Phosphide (InP) based epitaxial wafers for optical communication, industrial application, and special-purpose projects. The company specializes in the metal-organic chemical vapor deposition (MOCVD) reactors for the epitaxial growth of the III-V compound semiconductor material. The firm is consistent in manufacturing epi wafers in-house. In addition to the general epitaxial growth, they also provide services for their customers, for example, in Zn-diffusion (for PD), grating forming and re-growth (for DFB), and selected area growth. These services add great value to their customers in shortening the overall process time, and delivering consistent quality as well as streamlined production flow.

LMOC’s wafers are of two types – the GaAs wafers, which have a 630 to 1060 nm wavelength, and the InP wafers, which have a wavelength of 1200-2200 nm. One of the most important components used for the growth and manufacturing of these wafers are reactors, and LMOC has the capacity of 27 operational reactors at present. 16 of these reactors are Showerhead type, while the rest are Planetary G4 reactors that provide more output.

With such capabilities, LMOC successfully caters to clients from four specific verticals. The most important market is the optical telecommunications industry, where the wafers are utilized in the 1.3 – 1.5um FP and DFB lasers as well as in PD, MPD, and APD. It has further use in optical transceivers for long–haul, short-haul and 5G fiber optics transmissions. Secondly, the company focuses on data centers owing to the application of epi wafers in high speed vertical-cavity surface-emitting lasers (VCSELs), 25G DFB laser, and Si-photonics. LMOC also offers its epi wafers for industrial laser cutting. The other highly significant application is LiDAR, which is mostly found in auto-driving vehicles. LMOC’s wafers are used widely in several medical labs in their medical lasers, as they are safe for the human skin and are used across several medical labs. The company’s wafers also serve a good fit for 3D sensing applications for face identification in smartphones.

LMOC has proven expertise in epi quality assurance (EQA) that ensures the verification of the wafer quality at the device level. This additional monitoring and testing of wafers help to shorten the development cycle by providing accurate device performance. The company has invested heavily in quality control and quality measurement equipment to consistently deliver quality wafers. These tools include an X-ray diffractometer, concentration profiler, surface scan, AFM, SEM, and Nikon Normaski microscope, among others. With their certified quality management systems and expertise, they can better control and monitor the quality of wafers they provide to their clients.

Since its inception in 1997, LMOC has come a long way to become one of the leading manufacturers of epi wafers. Going forward, the company sees immense opportunities in data centers and the booming of 5G. Alongside this, there will be a boom of clients from industries of smartphones, sensors, laser technology, and even wearable device manufacturers. To meet the growing demands for epi wafer, LMOC has built a new facility Fab II, nearly a mile away from its current facility, Fab I, located in the Southern Taiwan Science Park in Tainan. With the firm’s expertise, strong R&D, stable manufacturing and highly experience quality control, it can help clients with a quick turnaround time to allow better efficiency and improved results.

Wei Lin was born in Tainan, Taiwan, Republic of China, on January 11, 1956. He received the B.S. degree in Electrical Engineering (EE) from Tatung Institute of Technology in 1978, and the M.S. and Ph.D. degrees, also in EE, from National Cheng-Kung University.

From 1981 to 1991, he was an engineer at the Northern Taiwan Telecommunications Administration, Ministry of Transportation and Communications. From 1991 to 1998 he was with Photonic Technology Research Laboratory of Chung-Hwa Telecommunication Laboratories (CHTL), Ministry of Transportation and Communications as a task leader and then been promoted to a project leader in 1992. In 1998, he left CHTL and founded LandMark Optoelectronics Corporation (LMOC) producing InP- and GaAs-based epiwafers by Metal-Organic Vapor Phase Epitaxy (MOVPE) technology. LMOC’s epiwafers are mainly applied to optical fiber communications. He was the Vice President in LMOC during 1998 to 2005 and has been promoted to General Manager during 2005 to 2016. In 2017, he was promoted to CEO/CTO and soon of that also a vice Chairman (VC) of LMOC in mid of 2018. He has been also the leader of Failure Mode and Effect Analysis (FMEA) Group in LMOC since 2011.

He has been working on MOVPE for more than 30 years. His research interests include growth and characterization of III-V compound semiconductors, fabrication and characterization of modulation-doped pseudomorphic AlGaInAs/(In)GaAs or AlGaAs/(In)GaAs FET's, many kinds of InGaAsP//InP or AlGaInAs/InP long-wavelength lasers (1.2-1.9mm), InGaAs/InP photo-detectors and GaAs-based material high power lasers and vertical cavity surface emitting laser (VCSEL). Dr. Lin is a member of Taiwan Chinese Society for Materials Science.

“We are a major supplier in GaAs and InP based epitaxial wafers for optical communication, industrial application, and special-purpose usage.”