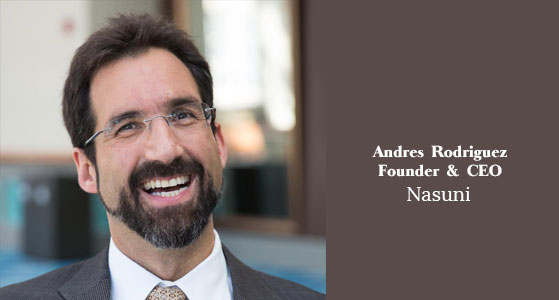 When the New York Times launched its first web presence, new CTOÂ Andres RodriguezÂ faced a major challenge â€“ how to scale web services from 10,000 internal users to millions of subscribers. Rodriguezâ€™s IT team could have purchased racks of web servers and load balancers. But building out The Timesâ€™ data center wouldnâ€™t withstand the massive number of hits to its site when a major story broke. Instead, Rodriguez turned to Akamai, whose use of the internet to replicate and cache content globally provided scale a single enterprise couldnâ€™t match. His early use of what is now considered a cloud service was a huge success.

As The Times began digitizing more of its content and production workflows, Rodriguez soon encountered his next big challenge â€“ how to store, protect, and manage the files that were doubling in size and number every year. He could have purchased racks of NetApp NAS devices, backup solutions, and disaster recovery infrastructure. But this hardware-based model could no longer support the magnitude of file growth. A new file service approach uniting the performance and access of NetApp with the scalability, stability, and global reach of Akamai was needed.

But, how to get files â€“ the worldâ€™s fastest growing type of data â€“ into these cloud object stores? A file system was the answer. Specifically, a next-generation global file system that could support a unified set of enterprise file services. This was how Rodriguezâ€™s idea for â€œNAS Unifiedâ€ â€“ Nasuni â€“ was born.

With Nasuniâ€™s enterprise file serviceÂ and edge appliances deployed across numerous offices, there are a number of benefits, including:

Nasuni is known for creating the worldâ€™s first cloud-native global file system that integrates with public and private clouds to solve the file data growth challenge for enterprise customers. â€œOur product is innovative, game-changing, and challenges the status quo â€“ just like the people who work here,â€ says the CEO of Nasuni, Andres Rodriguez.

People at Nasuni arenâ€™t just software engineers, customer support agents, and sales representatives. Some of them are beer-loving strategy game enthusiasts. Some are fitness fanatics and travel addicts. Some are foodies and some are Pearl Jam devotees. â€œBut we all have a few things in common. We come to work every day excited about our ability to solve real business problems for our customers,â€ the employees at Nasuni express.

And the entire team at Nasuni is passionate about working for a company that is growing fast but is still small enough for each person to have an impact. The level of integrity and teamwork here is striking. Every employee challenges the other to be better every day. People have fierce conversations, come to a consensus, then move on.

Meet the Pioneer of Nasuni

Andres Rodriguez is the Founder and CEO of Nasuni. He is a storage visionary and highly successful entrepreneur. As Nasuni CEO, he brings passion and energy to his role refining and communicating Nasuniâ€™s strategy and technology direction. Rodriguez also oversees the companyâ€™s strategic partnerships.

Rodriguez was previously Founder and CEO at Archivas, creator of the first enterprise-class cloud storage system. After Archivas, he turned his attention to his next venture, Nasuni (NAS Unified). Delivering value-added enterprise file services on top of cloud object storage was the natural progression of Rodriguezâ€™s cloud storage vision. Before founding Archivas, Andres was CTO at the New York Times, where his ideas for digital content storage, protection, and access were formed.Â Rodriguez has a Bachelor of Science degree in Engineering and a Master of Physics degree from Boston University. He holds numerous patents and is an avid swimmer.

â€œWe focus on solving problems, not on placing blame, and everything we do is either for the benefit of our customers or our people.â€

â€œOur product is innovative, game-changing, and challenges the status quo â€“ just like the people who work here,â€