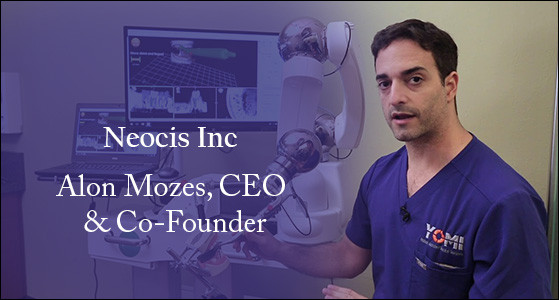 Precision is the key to dental surgeries and technology can help. A company based out of Miami, Florida, Neocis has forever changed the landscape of dental surgery with its cutting-edge technology- Yomi. Yomi is enhancing dental surgeons’ capabilities and advancing patient care across the country.

Neocis was founded by co-founders Alon Mozes and Jaun Salcedo in Miami Florida, after their stint as principal engineers of MAKO Surgical Corp. The co-founders had worked to develop the revolutionary RIO system for guided robotic orthopedics at MAKO. But MAKO had a successful IPO and was eventually acquired by Stryker for $1.65 billion. The duo then set out to identify medical markets that could benefit from haptic guided robotic surgery. Mozes felt that the dentist industry will be a great fit for this.

The duo spent years developing a prototype. They received some key clinical inputs from a close dentist friend who was nicknamed “Yomi”. Hence, when they created the company’s patented technology later, they named it the same.

After its establishment in 2009, the company mainly focused on research and development. In 2012, the company raised funding from its lead investor Fred Moll, who is the name behind many robotic surgery companies including Intuitive Surgical. Neocis’ clinical study for its Yomi technology was completed in 2016 that led to a landmark- groundbreaking clearance from the FDA.

Yomi is clearly one of the greatest robotic surgery innovations but there is a common misconception that the robotic system performs surgery. But in reality, it augments the expertise of a dental surgeon through its state-of-the-art haptic guidance. “Haptic guidance is the ability for a robotic system to physically guide a surgeon so they can perform surgery exactly as they planned,” says Alon Mozes, Neocis CEO and Co-founder.

Yomi’s guidance through the use of haptic robotic technology and multisensory feedback helps the surgeon lock on the precise location, angulation, and depth to place the implant exactly where it needs to be. Once the system has locked in, it maintains the hand-piece trajectory and prevents unintended deviation from the plan. It can track and follow the patient's motion too if he moves. The system also provides visual guidance that helps with a minimally invasive approach. It can further increase the pace of the surgical procedure, faster recovery, and lesser pain for the patient.

With Yomi, the surgeon is finally free of constraints that come in the form of cameras and physical guides. Yomi also allows intraoperative adjustments that allow a surgeon to retain control of the surgical plan. “Once you’ve decided exactly where the implant should go, Yomi guides you into the position,” says Nima Massoomi, DMD, MEd, MD

In late July, Yomi received a groundbreaking 510(k) clearance by the U.S. FDA for assisting with full-arch implant surgeries. The development was a trailblazing achievement as Yomi can now be used for full arch implant cases as well as in edentulous cases. The American College of Prosthodontists says that over 36 million American citizens are affected by this issue. With the clearance, Yomi edentulous split can enable dental surgeons to use Yomi’s technology to reach these people and help them.

He has over 20 years of experience in computer graphics and image-guided applications in startups. He was the principal engineer and one of the first 20 employees at MAKO Surgical Corp. At MAKO, he helped develop the software for the company’s important RIO system for Orthopedic robotic surgery. He has also developed Emmy award-winning technology with Sportvision, Inc.

He has a PhD in Biomedical Engineering from the University of Miami. He earned his B.S and M. Eng degrees in Computer Science from the Massachusetts Institute of Tehcnology (MIT).

“With Yomi, the doctor and the staff have more time and attention on you and what’s going on with you” – Jane Bozarth, Yomi patient

“Because of Yomi, my dental surgeon was able to do it all at once, [..] it saved four month’s time and also the cost of having to come in for a second appointment. I’m very happy with the experience” – Kathleen, Yomi patient

“Yomi doesn’t operate autonomously, meaning I can’t go home and leave the robot operating for me. It assists me at the time of surgery. It helps reduce the risks associated with free-hand surgery. It’s a way to guarantee that we’re going to go where we want to go.” – Dr. Guillermo Chacon
Oral & Facial Surgery Centers of Washington

“Neocis is transforming dental implant surgery with advanced robotics. The company is driven to innovate and committed to bring new approaches to improve patient care and quality of life.”

“Neocis works closely with dental surgeons to understand their needs with the goal of overcoming surgical and treatment challenges.”

“We prioritize productivity over hours spent, and we strive to be thoughtful about our teammates personally and professionally.”