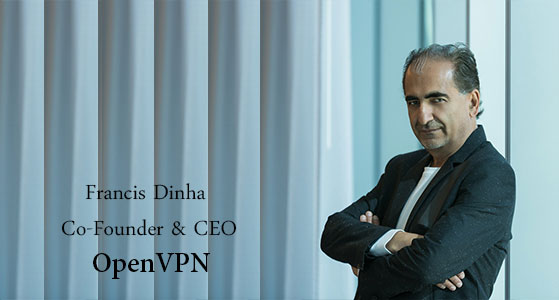 Innovative entrepreneurs have molded not just the economy, but our society as a whole. They have created an entirely new enterprise ecosystem; one that dares to dive into areas that others have not yet ventured. They create paths sewn with dedication, inspiration and hard work so that others can follow.

One such highly inspirational entrepreneur is Francis Dinha, who established OpenVPN Inc. As a young boy in Iraq, Dinha’s earliest childhood memory was the escape of the destructive bombing of his home. Fleeing to Baghdad, he and his family endured terrible hardships, struggling  for food and shelter.

“Even when I was young, I knew the meaning of fear and poverty,” Dinha says. “I knew there was something better for me out there.”

It was these hardships that sparked Dinha’s entrepreneurial spirit. As a child, he took what little money his mother had and bought a pack of cigarettes. He headed through the rough streets of Baghdad, boldly walking up to strangers and sold the cigarettes – one by one for a profit – until there was enough money for his family to eat that night.

After fleeing to Sweden to escape the regime of Saddam Hussein, he  earned his Master’s degree in Computer Science. After several decades of working in technology, the entrepreneurial spirit in him began to set a new course for his life. With his sights set on a new venture, Dinha co-founded OpenVPN with James Yonan, who authored the original open source software available on the market today.

“Investing so much of my hard-earned money was terrifying,” Dinha recalls. “But I knew it was the right idea at the right time.”

For Dinha, safety and security while using the Internet have always been a major concern. With the expansion of free public WiFi in nearly every restaurant and coffee shop, the threat of a data breach has increased exponentially. This risk is what inspired OpenVPN to provide open and secure remote access for Internet users. Today, companies like Tesla and Google are utilizing OpenVPN’s software. For example, Tesla’s vehicles are equipped with OpenVPN to protect the ultra-tech cars from being hacked, while Google is using the technology to protect its employees using the company’s private networks. In addition to these tech giants, small and medium-sized companies, as well as everyday people, are using it to keep their networks and sales in motion safely.

The Future at OpenVPN

OpenVPN’s first project, known as Access Server, was an enterprise edition of the open source VPN software. The Access Server software has been deployed by more than 10,000 business customers and continues to be used by many to secure their remote access or private cloud. Despite the success of Access Server with enterprises, Dinha knows there is still a looming challenge hovering over the industry - cloud security. OpenVPN has ambitious plans for the future to solve this need in the marketplace. While the company won’t make public exactly what their innovative team is working on, expect something that will change the way people do business.

Behind OpenVPN is a committed staff who are inspired by OpenVPN’s vision. Part of the company’s values include giving autonomy to its employees, which has been a significant factor in its success.

“The freedom with this kind of flexibility allows our team space to be more creative, which is an important factor for innovative ideas. At OpenVPN, we don’t believe in a hierarchy - this means nothing is above anyone’s pay grade, including myself as the CEO. We believe in teamwork and communicating openly with each other to solve problems.”

Dinha’s contribution to OpenVPN software has resulted in better security for users and businesses across the globe. In order to ensure that companies continue to work towards a higher level of security for users, Dinha feels that companies working within this space need to collaborate with the industry, policy makers, experts and users to develop solutions and standards that address cloud security.

From the Entrepreneur’s Desk

Francis Dinha is the co-founder and the CEO of OpenVPN Inc. He earned his Master’s of Science in Computer Engineering in Sweden. After graduating, he moved to Dallas with a job offer from Erickson. After working for several decades in technology, he founded his first company Packetstream in 1998. Several years later, Dinha co-founded OpenVPN with James Yonan. The open source software has been downloaded by more than 50 million worldwide since its inception. As the CEO, his key role is to help with product roadmaps, strategic planning, market positioning, business development, and growth strategies.

“We believe all people should have unfiltered access to the Internet.”

“Our mission is to connect your world securely by providing a more safe and secure experience online.”

“Financing is the fuel and human capital is the engine that accelerates and moves the business forward towards growth.”