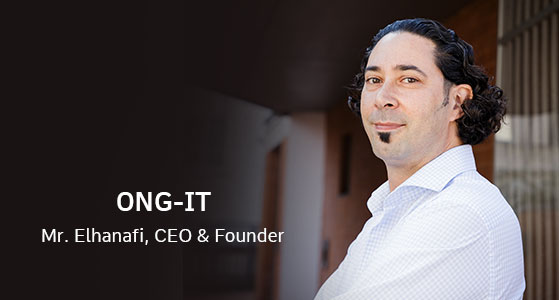 Geospatial data use has expanded beyond traditional consumers and is adding value to the security, infrastructure, retail, healthcare, and financial markets, to name a few. This expansion indicates that adding geospatial data and -analysis to any data collection or â€“processing effort is beneficial. Well, ONG-IT has already done that. The companyâ€™s SAIMOSÂ® security platform exploits to core the power of Geospatial data and automated Video Analytics.

SAIMOSÂ® is a 2017 established product of ONG-IT GmbH â€“ a company which was originally Oil & Gas IT and later expanded to offer services in sectors like project implementations, consultancy, project management, and also data migration in areas covered by the Geographical Information System (GIS). The goal of SAIMOSÂ® is to leverage the possibilities of complex technologies, in the simplest way possible, to enable effective security solutions for users. SAIMOSÂ® eyes the companies and end consumers who are in need of protecting and/or managing their assets.

Karim Elhanafi laid the foundation for ONG-IT in the year 1997 with its many bodies located in Vienna, Cairo and Abu Dhabi. ONG-IT is a member of the Pipeline Open Data Standard (PODS) Association, Esri Partner Network and got a vital international partner network in the EMEA region. The company provides services and solutions to the Oil & Gas Industry, Security Industry, Infrastructure Operators, Utilities, Municipalities, and many others to support and help optimize their daily technical and business workflows.

Oil and Gas companies were greatly affected in 2015/2016, as oil prices sank to an all-time low since the great recession in 2009. Companies reduced their investments significantly and a weak market led ONG-IT to look for opportunities in different areas. The company soon realized that there was a huge demand for security solutions in the market because of the geopolitical circumstances that prevailed, back then. They started to look into Intelligent Video Analytics to broaden their portfolio. Eventually, they combined the idea with their traditional GIS know-how and developed the platform SAIMOSÂ® - Situational Awareness, Infrastructure Management & Operations Security.

The challenge initially, however, was to convince customers â€œto deploy cutting-edge technology solutions in their conventional operations,â€ said Mr. Elhanafi, â€œall while making sure they do not miss their current available potential advantages against their competition.â€

WebGIS is a technology used to display and analyze spatial data on the Intra- or Internet. It offers customers a new means to access spatial information without owning extensive GIS know-how. WebOffice, a product developed by SynerGIS in Austria, is a â€˜tweakedâ€™ WebGIS platform with additional configuration options and customized user interfaces. CartoPacÂ®, a product developed by CartoPac Inc. in Fort Collins, is a complete GIS field data collection solution delivering one platform for data, from collection to predictive analytics. ONG-IT is the sole distributor of WebOffice and CartoPacÂ® in the MEA region and was also part of several successful project implementations, recalls Mr. Elhanafi, talking about their initial ventures.Â

And eventually, the company officially unveiled its own SAIMOSÂ® platform at the Security Essen Exhibition in September 2018. The platform launch was accompanied by the release of their few new products that include SAIMOSÂ® WatchBox, Control Center, Managed Security, Guard, and Video Analytics.

The SAIMOSÂ® WatchBox is a next generation alarm system. Human intruders are detected by intelligent video analysis. Animals and bad weather do not trigger an alarm, which avoids expensive false alarms and false police actions. The WatchBox can be easily installed and configured by end-customers.

An alarm message including a video sequence is sent via app or e-mail to the owner and/or an emergency center in order to be able to react immediately to the alarm. In case of emergency, a voice message via loudspeaker can be triggered to deter burglars.

The SAIMOSÂ® Control Center is designed for control rooms or security operation centers providing a map-centric situational awareness to complement the common operational picture. The surveillance, security and alarm management for a large number of objects is facilitated and optimized using geospatial analyses. The integration into existing control center solutions is supported. Real-time guard locations are visualized and their routes can be optimized. Security guards are smoothly coordinated via the mobile app SAIMOSÂ® Guard. The result is increased efficiency of security measures and reduced costs. Decision making and suitable measures are supported by workflows. Alarm reports are automatically generated based on the collected data.

SAIMOSÂ® Managed Security is a service to connect the WatchBox to a control room against monthly fees.

Alarms are sent to the control room where operators can trigger a voice message immediately and send a guard to the alarm point if necessary.

â€œBeing â€˜smartâ€™ is to introduce new ideas to the market while also meeting customer demands.â€

Mr. Elhanafi is proud to present ONG-IT as the only company to combine GIS know-how with Oil & Gas, and also Security. The smart company ONG-IT disguises itself as a startup to uniquely serve them security community with geospatial solutions for their problems. Mr. Elhanafi said, â€œWeâ€™re just cooking with water, but weâ€™ve got the smart ingredients for our solutions provided to the markets. Itâ€™s all about our innovation to make technologies work better togetherâ€¦ andâ€¦. to glue â€œisland-solutionsâ€ together for higher efficiency, for clients.â€

A company is smart when a team is. On the R&D side for SAIMOSÂ®, ONG-IT brings together a team of professionals with different skillsets and varying expertise, or as Mr. Elhanafi says â€“ â€œacross of two generations of software developersâ€. â€œWe are also having top-level security consultants advising us on market needs and discussing with us the ROIâ€™s for customers by implementing our set of technologies,â€ he added.

ONG-ITâ€™s smart team scaled down the complexity of its solutions to start offering it to consumer buying as well. And as a result, the companyâ€™s enterprise solutions can also be deployed by a non-techie, says Mr. Elhanafi. For example, SAIMOSÂ® WatchBox is lightly designed and can be easily configured by a consumer, say villa owners, to secure their property â€“ the CEO illustrated.

ONG-IT aims to increase their footprint by expanding their SAIMOSÂ® platform offerings for security projects while it stays well-heeled in the Oil & Gas Industry as well.

Mr. Elhanafi, the CEO and Founder of ONG-IT, studied Aeronautical Engineering and his interests switched to GIS during an internship in 1990. He went on to specialize in it at the University of Salzburg in Austria. The GIS evangelist began his career in Oil and Gas business in the late â€˜90s. He laid the foundation of ONG-IT (previously known as Oil and Gas IT) in 1997.

In the meantime, he experimented with GIS data collection and management solutions and began offering GIS support to Infrastructure and Pipeline industries since 1998. Successful installations of the project span across Europe, the Middle East, and North Africa. He spent most of his career life in the deployment of pipeline projects on an international level.

Â He also aimed to deploy efficient workflows by leveraging state of the art technologies. His objectives soon expanded to include solutions for the security community, and as a result, SAIMOSÂ® platform was born.

â€œWe are growing and do believe that our target markets will raise the understanding of combining diï¬€erent technologies for optimizing their daily operations by digitalization.â€

"Thinking about tomorrow isnâ€™t enough. To build robust solutionsâ€¦ it is important to look beyond borders and target the exceptions in operations."