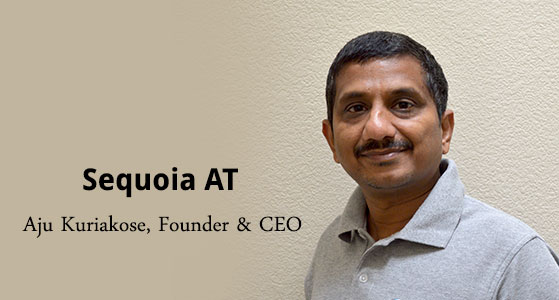 Sequoia AT: Software solutions for a smarter world

The IoT ecosystem is growing exponentially each year and playing a bigger part in how the world functions. But the software component is also very important to the hordes of IoT devices that are being deployed every day in various verticals. Sequoia AT is one of the foremost companies focusing on the software-aspect of IoT.

We interviewed the Founder and CEO of Sequoia AT, Aju Kuriakose to tell us more about his company.

What was the motivation behind starting Sequoia AT?

Sequoia AT was founded with the vision of bringing interesting ideas pertaining to IoT and life sciences to the market. We wanted to make these available to everyone. There was a difference in how product-based companies and service-based companies thought when Sequoia AT started. And we wanted to bridge this gap by being a true service partner to product development companies. We all know that IoT is just at the beginning as more and more consumers are starting to warm up to the idea of the technology to improve life and overall productivity. With a company like Sequoia involved, customers deploying IoT can look for significant improvement in their business which could lead to better bottom lines in due time.

How is IoT impacting the businesses today?

When IoT is implemented as a solution to bring upon improvements- based on massive data sets collected by the various connected devices using analytics and machine learning, it has great potential in reducing the cycle time. It also reduces costs, improves responsiveness and further improves customer satisfaction too. But many times we see companies jumping in to implement IoT without a thorough analysis. This is perhaps an inefficient way of solving problems.

The IoT is touted as a hyper-secure network that is suitable for storing and transmitting confidentialÂ datasets. Do you agree with this?

Not necessarily. The network is only a part of IoT. It has evolved security-wise but there are sensors, edge devices, and last mile connectivity which are not hyper-secure by default. So, security certified products need to be selected for these parts of IoT for the overall infrastructure to be considered secure.

What are the important aspects of what you do pertaining to IoT?

As a company, we largely focus on the software aspects of implementing IoT. When an IoT software ecosystem is being deployed it starts with firmware, then moves on to the cloud, mobile, data analytics and finally the application of AI. Sequoia works with the customers on all the above parts catering to their needs.

What kind of impact do you think IoT will have on employment in general?

IoT is surely going to change the landscape of employment as sensors and devices take over some of the lower level work. Low paying jobs will eventually be phased out as IoT realizes its potential through AI. But as the low-level jobs go away there will be more opportunities to be explored in AI and Data Science.

Tell us how Sequoia AT stands tall amongst its competitors in the industry.

The company derives its name from Sequoia trees as we believe that it symbolizes our long-term and strong relationship with our customers, employees, and investors. The company stands out in one other way â€“ it does not believe in hierarchy. At Sequoia, all employees are treated as equals, with the idea of creating a branching community where everyone can help everyone else grow through a fundamental strong internal bond. So, the leadership in the company is not a monopoly, it is fostered by all.

The nature of Sequoia ATâ€™s business is as such that we are highly dependent on a great relationship which is driven by clear improvements in the customerâ€™s business. The longer a customer is satisfied, longer the relationship survives. Sequoia has been able to sustain long-term partnerships because of its strong and loyal commitment to its customers. And we continue to strive for this.

Mr. Aju Kuriakose has held various leadership roles in the industry for the last 18 years ranging from High Tech Sales, Market Development, M&A, and Operations. Before Sequoia AT, Mr. Kuriakose headed the North American business of Accel Frontline Limited which is publicly traded on the BSE and the NSE. Here, he was responsible for growing the North American operations. The company was acquired by CAC Corporation subsequently.

Mr. Kuriakose is a person who believes in giving back to the society. He is actively involved in social causes all the time. Under his leadership, Sequoia AT India raised money and made donations to the people affected by the devastating floods in Kerala, India in 2018. Further, Mr. Kuriakose is presently in the process of finalizing and launching a finishing school initiative in India which aims to bridge the gap between workplace and college education. He has a Bachelorâ€™s degree in Mechanical Engineering and an MBA in marketing.

â€œWe cover all your needs from custom drivers and firmware to supporting your hardware. Count on us to deliver correctly and expertly, the first time.â€