30 Most Valuable Companies to Watch 2019 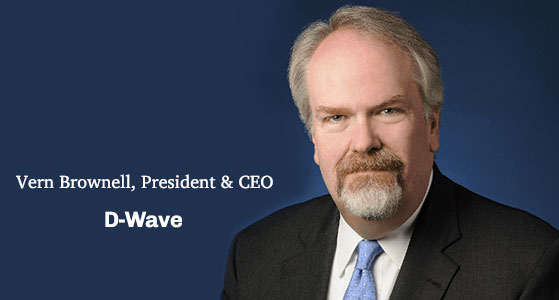 “When you change the way you look at things, the things you look at change.”
- Max Planck, Father of Quantum Physics

Mankind has evolved not just in his lifestyle, but also in new discoveries and possibilities. When it comes to quantum computing, it’s taken over fifty years of advanced mathematics, computer science, and material science to really transform quantum computing. The power of supercomputers is incredible, no doubt. However conventional systems can’t address complex computing problems. That’s why at the core of quantum computing transformation is D-Wave. D-Wave set out with a vision to better understand everything, from the universe to our own DNA.

That’s another reason why the company keeps seeing new approaches to answer complex questions. Established in 1999, D-Wave believes it is still at its inception when it comes to quantum computing. Nevertheless, the company understands that quantum computing has immense potential to solve some of the most complicated scientific, commercial, defense, and other technical problems that organizations face. Recognized for its contribution, D-Wave has been the subject of a cover story in Time. The innovative firm has also received coverage in Wired, MIT Technology Review,  The Economist, The New York Times, and The Wall Street Journal.

It’s an understatement if we say D-Wave is the leader when it comes to quantum computing systems and software. With two decades of experience, D-Wave was in fact, the world’s first quantum computing company to venture out into this stream. Speaking about their mission, D-Wave says: “Our mission is to unlock the power of quantum computing to solve the world's most challenging problems.”

On a proud note, the systems from D-Wave are being used by world-class organizations and institutions including Volkswagen, Google, NASA, Lockheed Martin, Oak Ridge National Laboratory, and many others.

When you need to solve machine learning, material science, discrete optimization, and sampling problems, it’s D-Wave to the rescue. The company’s quantum computer leverages quantum dynamics that can boost new and innovative ways to solve any problems. When we dig deeper into D-Wave’s crux, we come across a process called quantum annealing. This harnesses the natural tendency of real-world quantum systems to find low-energy states.

Hear it from the company to understand this better: “If an optimization problem is analogous to a landscape of peaks and valleys, each coordinate represents a possible solution and its elevation represents its energy. The best solution is that with the lowest energy corresponding to the lowest point in the deepest valley in the landscape,” the website notes.

While all of this is quite interesting, we all want to know the applications of this technology. D-Wave says you can apply the technology for Optimization, Machine learning, Pattern recognition and anomaly detection, Financial analysis, Cybersecurity, Bioinformatics/cancer research, Traffic flow, Manufacturing processes, Internet advertising placement, Software/hardware verification and validation, and Image analysis.

-The D-Wave 2000Q System is the 4th generation quantum computer.

-The company has published over 100 peer-reviewed papers in leading scientific journals.

-D-Wave has installed more than $50 million worth of quantum systems at customer sites.

It was back in 2010 that D-Wave released its first ever commercial system- the D-Wave One™ quantum computer. The successive generations have seen double in the number of qubits. In 2013, the 512-qubit D-Wave Two™ system and the 1000+ qubit D-Wave 2X™ system in 2015 was released. Recently, in 2017, D-Wave launched the D-Wave 2000Q™ system with 2000 qubits and advanced control features. Additionally, D-Wave also provides quantum-inspired machine learning services, competition-winning, custom fabrication of superconducting circuits, and application development services.

D-Wave’s customers include independent developers and new quantum software companies. Partnering with D-Wave, they are all developing higher-level tools, system software, and applications that leverage the power of the D-Wave system. Together, they have combined forces to develop dozens of prototype applications and software tools, many of which have been published and presented at conferences and user forums.

Vern Brownell joined D-Wave as CEO in 2009, leading the company through its transition from research into the leader in the development and delivery of quantum computing systems and software. During his tenure, D-Wave secured its first customers including Lockheed Martin, Google and NASA, and Los Alamos National Laboratory, and raised over $170 million in venture funding. Mr. Brownell joined D-Wave from Egenera, a pioneer of infrastructure virtualization, a company he founded and at which he held executive roles including CEO. Prior to Egenera, Mr. Brownell served as the Chief Technology Officer at Goldman Sachs where he and his staff of 1,300 were responsible for worldwide technology infrastructure. He holds an MBA degree from Anna Maria College and a B.E. in Electrical Engineering from Stevens Institute of Technology.

“Our need to better understand everything, from the universe to our own DNA, leads us to seek new approaches to answer the most difficult questions.”

“We have a dedicated sales and systems engineering team including experts who train and assist our customers in developing applications.”