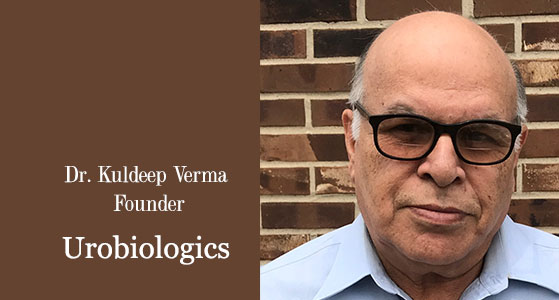 Most married couples want a small and balanced family with two children due to economic and social constraints. They also prefer one of each gender. However, without any guiding technology, they continue producing children in the desire of getting at least one baby of opposite gender.

Today, there are a lot of unscrupulous companies cashing on this desperation by selling baseless products like nutraceutical kits, gender diets, charts, and calendars to raise the chances of conceiving a boy or girl. But, none of them have any study or scientific basis and all of them simply raised false hopes for ‘swaying for boy or girl’.

This is where Urobiologics made a significant discovery with a need to develop a simple and scientific method to help couples plan for a baby of their desire. In 1982, Dr. Verma, the founder of Urobiologics, discovered the difference in the urine of an expectant mother carrying a male fetus versus a female one. It took him two years to develop a procedure in collaboration with two hospitals, which provided urine samples from pregnant women who were soon to be due.

The procedure enabled Dr. Verma to determine the gender of a fetus, although not with the desired high accuracy. Over time, with extensive research and testing of over around 40,000 samples, he found the accuracy to be highest during the first trimester.

“I discovered the difference in the urine of an expectant mother carrying a male fetus versus a female one in 1982,” recalls Dr.Verma. “The procedure enabled me to determine the gender of a fetus, with about 91% accuracy.”

A major breakthrough came in 2006 when Urobiologics discovered for the first time that women have alternating boy-girl conducive menstrual cycles, which led to development of the PreGender Preconception test. The difference between two cycles being extremely small, it took a lot more effort to master it. Currently 92% couples are getting their desired babies.

Urobiologics has proven that gender-specific conception is real and that the uterus does the gender selection naturally. It strongly believes that the PreGender Preconception test is the only effective tool for family balancing.

Urobiologics offers two types of urine tests which are :

The PreGender Preconception Test works for conceiving a boy or girl. The customer names their dream baby first. Let’s say, to have a girl they name it Rose. Assuming that the first sample showed a boy phase, and the second sample showed a girl phase. Based on this, Urobiologics sends conception plans to conceive in girl phase only. Later, immediately after a positive pregnancy test, they can find the gender. The ultrasound scan then confirms the gender as the girl.

At first, readers didn’t believe this technology was possible. However, with above 300 success stories, it’s a routine now! Over the years, the customers had a very pleasant experience with the company because they believed that this technology makes sense.

Dr. Verma believes that the trigger factor for the establishment of Urobiologics is the maternity hospital management. It opened the doors to this discovery when they agreed to supply urine samples from women who visited their clinic.

This patented bright idea with huge potential is one of the biggest assets of the company. Determination, cooperation by customers, honesty in accepting errors and refunding, display of boldness and truthfulness through Live Charts on the website have contributed to the company’s growth. Every day, Dr. Verma drives his inspiration from the feeling that he’s developing something unique for guiding women in the right direction.

There is a usual routine at Urobiologics. “Couples come smiling with stars in their eyes, with a strong hope that I can help balance their family,” says Dr. Verma.“They come again smiling to thank.” He is immensely thrilled and happy when he helps a couple get a boy or girl after 3-4 babies of the same gender. “My biggest thriller was from a customer who got a boy after seven girls using our PreGender test program. She called me from a hospital bed while crying with joy.”

In the coming future, Urobiologics has a couple of products to be added to their list. A lateral flow strip for gender planning as well as for gender detection is in its planning stage and soon to be developed.“We are also planning to prepare a live video where sperms would be seen preferentially moving towards follicular fluid representing boy or girl phase,” explains Dr. Verma. Currently, Urobiologics has four patents on this technology. It is on a lookout for investor partners to develop gender planner test strip.

Dr. Kuldeep Verma is the Founder, President and Chief Scientist of Urobiologics. He is an accomplished biochemist/biotechnologist with a multidisciplinary training in toxicology, molecular biology and agriculture. Since the company’s establishment, he has primarily marketed Urobiologics through word-of-mouth. Over the years, the test’s average expected accuracy has improved from 91% in 1999 to approximately 98% since March 2007. Dr. Verma holds a Ph.D. in biochemistry, biotechnology, and toxicology from the Duke University School of Medicine.

“We think we have made a major new medical discovery where we put all of our attention on reproductive process in women.”

“There is no natural gender selection program having such a high success rate. If there is, we would like to hear about it!”