We are AbbVie, a highly focused research-driven biopharmaceutical company. 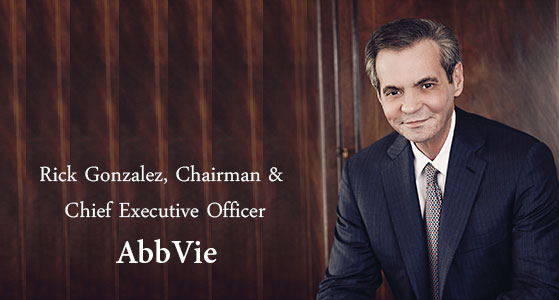 We are AbbVie, a highly focused research-driven biopharmaceutical company.

Getting patients to better satisfy with their prescribed drug therapy and encouraging the development of new drugs can balance or even lower, overall health care spending. Innovation in theÂ pharmaceutical industryÂ can boost the output of an economy by reducing lost productivity due to disease and sickness.

Research and innovation are the keystones of AbbVie business. Through dynamic and collaborative approach the company advances leading-edge. This allows AbbVie to find enhanced solutions for those diseases which are challenging. The firm concentrates on discovering, developing and delivering drugs in therapeutic areas where it has proven expertiseâ€”and can make an impact. This includes:

AbbVie may have been founded in 2013, but its roots run deep. In 2013, the firm became a separate company from Abbott, though they share a common legacy and strong prospects for future success.

The firmâ€™s name represents its connection to the past and the future. When it became its own company, AbbVie formed a new kind of enterpriseâ€”a biopharmaceutical company. The firm blends the stability, global scale, resources and commercial capabilities of a pharmaceutical company with the focus and culture of a biotech.

The company will choose a particular difficult-to cure diseases so that they can leverage their R&D expertise to advance science. The company is making constant efforts to create solutions that go beyond treating illness to create positive impact.

To go through patient journey, the team at AbbVie collaborates with peers, academics, clinical experts, front-line practitioners, governments and advocacy groups which motivates the company to develop and deliver new solutions that makes a difference.

For the team at AbbVie working here is more than a job whose purpose is to help people lead better lives across the world. When the stakes are as high as a patientâ€™s well-being, the best ideas must rise to the top, no matter where they begin.

The companyâ€™s products are approved in individual countries for specific uses and the information provided is governed by local regulations. Product availability, name and indicated use may vary by country.

Science Rocks! The Plastic Eating Enzyme that Could Save our Environment

Science Rocks features AbbVie employees who share interesting research and why it matters. In this month's feature, Joel Melnick, executive medical director of general medicine, AbbVie, shares an article about an enzyme that may be able to break down some of the 8.3 billion tons of plastic that has been clogging up the worldâ€™s landfills for decades.

Found deep in a Japanese landfill, scientists may have discovered the solution to one of our most serious pollution problems â€“Â a modified enzyme that can digest polyethylene terephthalate (PET), the most common plastic in our landfills, which takes hundreds of years to break down.

It all started back in 2016 when a group of Japanese scientists started researching whether plastic can be degraded. They hypothesized that the best place to research this topic would be the local landfill where they obtained 250 samples of the soil near a bottle recycling factory in Osaka, Japan. They then identified a sample andÂ purified it to find the component that best digested the PET filmÂ and identified a new species of bacteria. They grew a pure culture and found this bacterium completely degraded the PET film in just over a month.

Over the next two years, other scientific groups have tried to understand the way the protein worked. Just recently, one of these scientific groupsÂ used a high-resolution X-ray to identify individual amino acids responsible for digesting PET and degrading the plastic. He then adjusted the amino acids to speed up the degradation from a month to a few days.

So it turns out many scientific answers are right under our noses â€“ or in this case â€“ at a refuse site. All we have to do is look for them. Does this discovery mean that we can trash as much plastic as we want? Not quite. We already have a 70-year backlog of plastic trash that needs to be recycled. So, we have some catching up to do. On the positive side, it only took Mother Nature 70 years to create a new bacteria species that uses our plastic waste as a nutrient. Other species that degrade plastic may evolve in the nearer term.

Rick Gonzalez is Chairman of the Board and Chief Executive Officer of AbbVie, a global biopharmaceutical company employing approximately 29,000 people and marketing medicines in more than 175 countries. Prior to AbbVieâ€™s separation from Abbott, Mr. Gonzalez was a 30-year Abbott veteran. He served as Executive Vice President, Pharmaceutical Products Group, where he led the global pharmaceutical business, including commercial operations, research and development and manufacturing. He also served as President and Chief Operating Officer, prior to a brief retirement.

"At AbbVie, we see a future full of possibility, where health is in reach andÂ patient lives are improved."