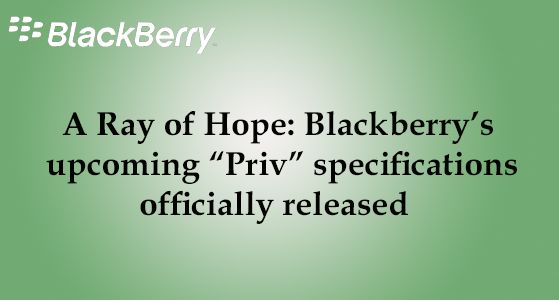 There was a time in history long lost where blackberry was ruling monopoly in business Smartphone industry. Now as a complete contrast with less than 1 % share in the market, the company is about to see its dooms day. As a resistance, the company is about to launch hoping “not so” it’s last Smartphone “Blackberry Priv” to protect itself from complete shutdown. It is an experiment more than a launch as this particular Smartphone is mainly built on “Android” platform and not on its mundane BOS.

Recently the company officially released the specifications and its launch price; shockingly it is the costliest out of all Blackberry Smart phones released till time. The price is around 58,000 INR.

Blackberry Priv is a slide phone with curved edges with 5.4 inch screen with amazing resolution of 2560×1440 pixel. Qualcomm Snapdragon 808 SoC is present under the hood which houses a 1.8GHz dual-core and 1.44 GHz quad-core processor clusters. It will be running Android 5.1.1 OS and boasts of a 3,140mAh battery. It will come with 3GB of RAM and 32GB of internal storage which can be expanded up to 200 GB using a microSD card.

The unique thing about the Priv is the fact that it will have both a touchscreen interface as well as a physical keyboard interface which can be accessed by sliding up the display, just like the erstwhile BlackBerry Torch. The BlackBerry Priv will sport an 18MP rear camera along with dual LED flash unit which is complemented with a 2MP front-facing camera.

With gradually downsizing market share, we need to wait until November for the launch critics and user review to decide whether this unusual experiment proves turnaround game or dooms day for Blackberry.