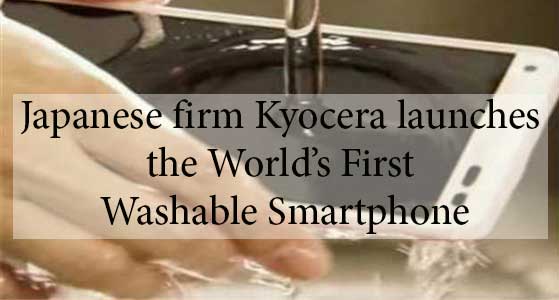 Recent research suggests that an average mobile user uses his phone 221 times a day. With so much usage, dirt and bacteria are bound to thrive on the phone. Cleaning the device is difficult as it cannot be washed and you have to resort to using a cleaning liquid. Doing this does not kill all germs and the device still remains contaminated. Well, things are going to change dramatically from now on. A Japanese mobile manufacturer has come up with the world’s first Smartphone that could be washed with soap. Yes, you read that right, Soap! The phone will be immune to the most deadly agent that can otherwise seriously damage it.

The Japanese company, Kyocera has launched a phone that can be washed with conventional foaming hand soap of the type found in many kitchens, according to the manufacturer. Of course, waterproof phones are already available in the market. They are easier to clean, but many won't stand up to repeated rinses with soap and water. That's where this new phone differs.

Several studies have shown smartphones to be dirty pieces of equipment, covered in bacteria because of the wide number of places they are taken and the numerous surfaces they are placed upon. Cellular carrier KDDI released a video showing the phone falling into the tomato ketchup sitting on top of a plate of Om Rice, a Japanese kid’s favorite made from egg and rice.

A bone conduction speaker is another feature of the phone. When it is held to the side of the user's head, vibrations created in the phone travel along bone and cartilage into their ear. The result is a sound that's as clear if not clearer than that from a speaker. The technology has advantages especially in noisy environments.

The phone is a fully featured Smartphone running Android 5.1 and with a 5-inch display and 16-megapixel camera. It will cost around ¥57,000 (US$464) in Japan and there are no plans to release it overseas as of now.