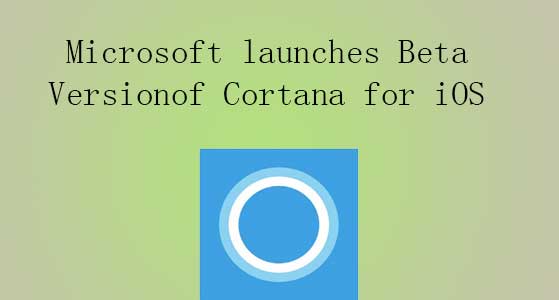 Microsoft officially announced Cortana’s beta version app for iOS, which is now available exclusively for those who signed up for it earlier this month. The company is conducting initial tests by using TestFlight, which Apple has limited to 2,000 people per app.

Cortana attempts to absorb natural language input similar to the way Siri does. The TestFlight version is to determine whether or not she can respond like a human assistant. The app is more likely to function as a VA (Virtual Assistant). It will perform as a cross-platform for those who work at PC in their offices and have an iOS- based device at home. According to a TechCrunch report, beta testers were asked to create a reminder on their Windows 10 PC to determine its functionality in an iOS device. The users were asked to judge if the experience of having a virtual assistant was more realistic.

Pioneered by Google Now and adapted by Siri, the feature for proactive suggestions will now be available on Cortana. Similar to any virtual assistant app present currently in the market, it can make appointments, keep a track of your sport scores, stock, or any other information seeking tasks that can be performed online. The makers claim that they are entirely focused on making Cortana on iOS a perfect combination for Windows lovers. Currently, there are no official announcements for its release date. However, Microsoft aims to make it a wide-range-cross-platform project, and for that purpose, it is also conducting beta testing for Cortana on Android.

One example of what Cortana’s cross-platform functionality is the ability to sync appointments. Say that you are sitting by your computer with your phone placed elsewhere, or perhaps you’re just feeling a tad too lazy to use it while working. You could simply use Cortana to state what to do, when, and where. After that, you could be reminded by Cortana via the phone while you’re on the road.