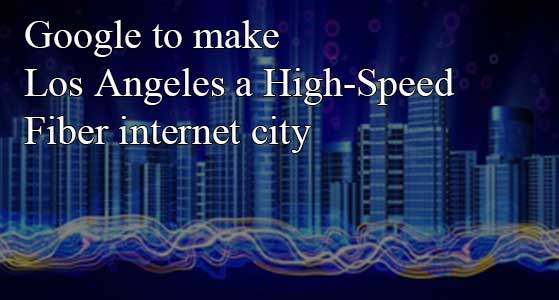 Faster connectivity will help local businesses better support enterprise cloud computing and explore revenue streams based on the Internet of Things, he said. And there is one local industry in particular that stands to benefit. “We’re arguably the content creation capital of the world and things like video require a lot of bandwidth,” Mr. Ross said. “As we become a more interconnected world, slow connectivity creates a bottleneck,” he added.
Fiber-optic cables transmit data close to the speed of light. A five-minute video that takes 13 seconds to download on a broadband 20 Mbps connection takes less than a second on a 1,000 Mbps fiber-optic connection, according to L.A. Internet service provider Fastmetrics.

Alphabet announced  that it had invited the city to consider building a Google Fiber network, a costly process that involves digging up roads to lay thousands of miles of fiber-optic cable. It also announced similar plans for Chicago. “In L.A., faster Internet may mean that indie musicians and YouTube stars can spend less time worrying about bandwidth, and more time creating their projects,” the company said in a post on the Google Fiber blog.

Before construction can start, Google Fiber requires cities to provide “accurate information about local infrastructure like municipal-owned utility poles, conduit and existing water, gas and electricity lines,” according to a “checklist” on the Google Fiber website, this includes paperwork on everything. The company also requires cities to have in place a standardized permit application and approval process.

Mr. Ross, who couldn’t say when construction was expected to get underway, said the city would work towards “intelligently expediting” the permit process, taking care not to rip up any roads that had recently been ripped up for any previous construction projects.
Google Fiber currently operates in Austin, Kansas City and Provo, Utah with networks planned in a dozen other cities, including Salt Lake City, San Antonio and Nashville. Building the service isn’t cheap: Analysts estimate that infrastructure costs run Google more than $500 per home.