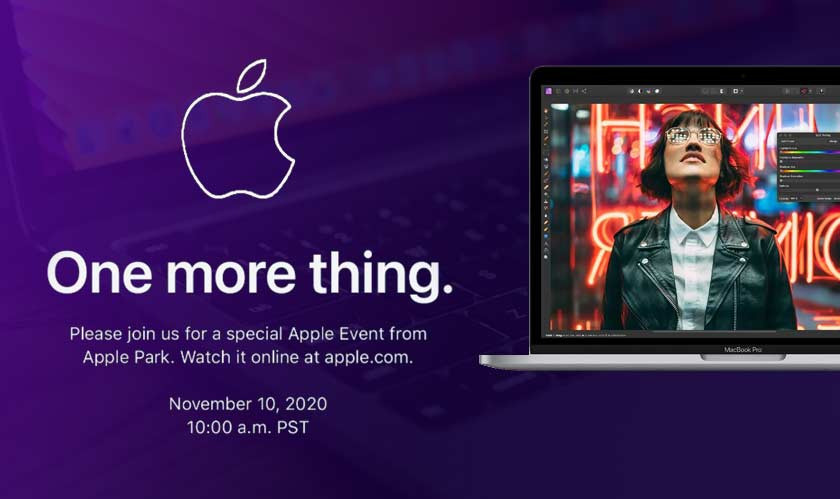 Apple has announced the "One More Thing" event for November 10th, which will see the new Apple Silicon-based Macs' announcement. Notably, the "One More Thing" phrase has been iconic for Apple, as the founder and former CEO Steve Jobs used the phrase more often. Apple had also used the phrase for the iPhone X in 2017. This makes it clear that for Apple, this event is significant.

Apart from that, the augmented reality teaser that Apple has been recently including in its event invitations seems to point to a Mac, showing an animated Apple logo rising up towards the viewer just like it would when opening the lid of one of the company's laptops.

Apple had earlier announced its plan to switch from Intel Processors to Apple Silicon in WWDC this June. It had also promised a Mac-based on Apple silicon by the year-end. However, the company accepted that it would take about two years to switch from Intel completely. Earlier, Apple had made such massive switchback in 2005, when it switched from PowerPC to Intel processors.

Apple is confident about its latest ARM-based chips, providing better performance with much lower power consumption and heat. Apple is expected to launch at least three different models of MacBooks, ditching Intel Chips. Apart from the MacBooks, Apple is scheduled to launch its all Mac lineup including, MacBook, Mac Mini, and iMacs, with its own chipsets later down the line. The "One More Thing" event is scheduled for November 10th, 10 A.M. PST. The live event will be streamed on Apple.com.