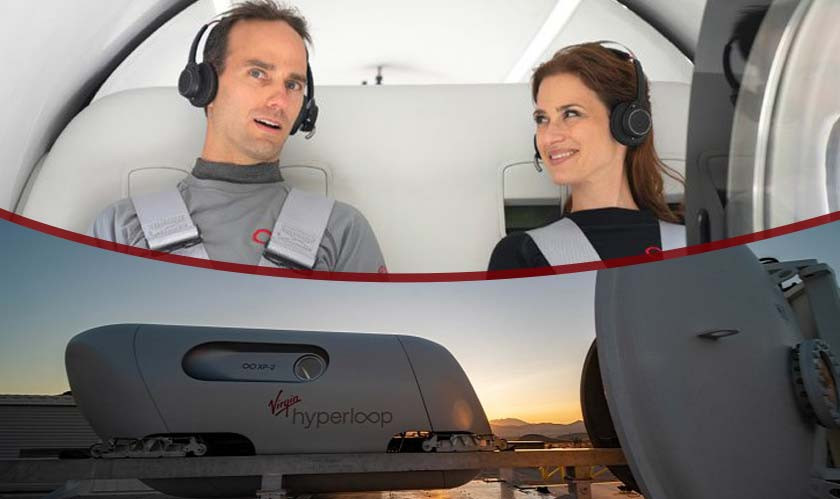 Virgin Hyperloop has conducted its first test with human passengers. The test run was performed on Sunday at the company’s DevLoop test track in the desert on the outskirts of Las Vegas, Nevada. The first two passengers were Virgin Hyperloop’s co-Founder and the head of the passenger experience, Sara Luchian.

The hyperloop pod in white and red, named Pegasus, was used for the trial run. The two first passengers were transferred to the airlock, and the air inside the enclosed vacuum tube was removed. The pod accelerated to about 100 miles per hour (160 km/h) as the track length was very short.

Virgin Hyperloop, founded in 2014, aims to make Elon Musk’s vision make a futuristic transportation system of magnetically levitating pods traveling through nearly airless tubes at speeds of up to 760 mph (1,223 km/h) a reality. The DevLoop test track is 500 meters long and 3.3 meters in diameter. The track is located about 30 minutes from Las Vegas, out in the kind of desert that hyperloop pods could one day traverse in minutes. The company says it has conducted over 400 tests on that track, but never before with human passengers — until today.

“No one has done anything close to what we’re talking about right now. This is a full scale, working hyperloop that is not just going to run in a vacuum environment but is going to have a person in it. No one has come close to doing it. Jay Walder, CEO of Virgin Hyperloop, told in an interview.